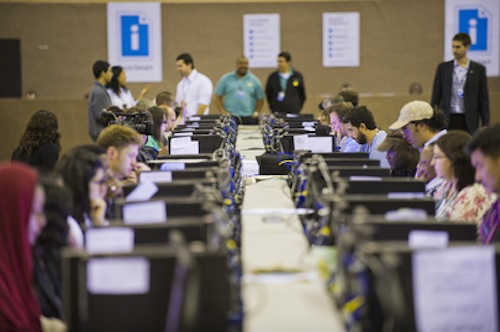 Another wave of arrests of campaigners and human rights activists took place between 16 and 19 July in the United Arab Emirates. Eighteen people were arrested, of whom 17 are still held, according to Reporters Without Borders.

The group faces charges of opposing the constitution and the basic principles of the UAE ruling system, in addition to having links and affiliations to organisations with foreign agendas. The Abu Dhabi public prosecutor, Salem Saeed Kubaish, said they “are being held in preventive custody for investigation”.

The arrests were made a day after the authorities announced the existence of a group alleged to be plotting against national security.

Reporters Without Borders calls for their immediate release. “The authorities must put an end to successive arrests of campaigners and human rights campaigners, which flagrantly violates basic freedoms,” the organization said. “The authorities wilfully regard any sign of criticism of the system as a danger to national security in order to stifle dissent. These attempts at intimidation are doomed to fail.”

The group of prisoners of conscience in the country, known as the “UAE 27” then the “UAE 30”, continues to grow. Today 31 activists and campaigners are in detention, all of whom have been arrested since March. Most are signatories of a 2011 petition calling for the Federal National Council, the UAE’s advisory council, to be given legislative powers and control over the executive.

It is not the first time the government has acted to conceal criticism. In April last year, a group of netizens known as the “UAE 5” were arrested for publicly insulting UAE leaders and calling for anti-government demonstrations.

Ahmed Mansoor, a blogger and administrator of the democracy discussion forum Al-Hewar, Farhad Salem Al-Shehh, also a blogger and the forum’s co-administrator, Nasser bin Ghaith, a writer and professor at Abu Dhabi’s Université Paris-Sorbonne, and the activists Hassan Ali Al-Khamis and Ahmed Abdul Khaleq, who have expressed themselves freely on the Internet and also signed a petition urging the authorities to carry out reforms. After a trial, they were sentenced on 27 November last year to between two and three years’ imprisonment for insulting UAE leaders and calling for anti-government demonstrations. They were pardoned and released the following day.

The activist Ahmed Abdul Khaleq was deported to Thailand on 16 July after being falsely summoned to a government office for administrative reasons on May 22. Stripped of their citizenship, he and his family were granted Comoros passports and economic citizenship, without political rights. In theory, this should allow them to live in the UAE and eventually to become naturalized citizens on the basis of a 2009 agreement between the two countries.

The United Arab Emirates is among countries under surveillance on the list of Internet Enemies published by Reporters Without Borders in March. For months the government has been stepping up pressure on netizens, cracking down on dissident voices and calls for democratic reform.