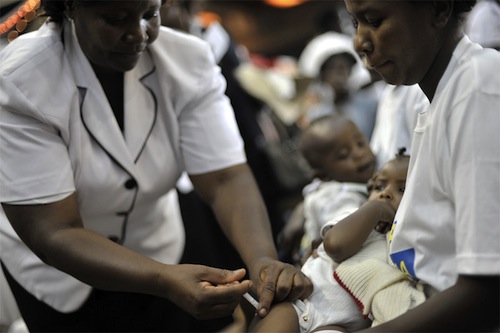 Over 50 million people in West Africa are to be immunized against seasonal meningitis over the next three months, marking a major step in a United Nations-supported campaign to eliminate the potentially fatal disease.

“Meningitis takes a terrible toll on the people living in vulnerable parts of Africa every year. It is a painful disease which can kill quickly and often leaves victims with disabilities that will blight their lives,” said Seth Berkley, CEO of the GAVI Alliance, the members of which include the UN World Health Organization (WHO), the UN Children’s Fund (UNICEF) and the Meningitis Vaccine Project, amongst a range of other bodies.

The seven countries targeted are vulnerable to seasonal severe outbreaks of meningitis with up to 430 million people at risk from the illness, according to a news release issued by the GAVI Alliance.

“Nobody really understands exactly why just in that region. But every five to seven years there would be an epidemic. There would be hundreds of thousands if not millions of cases. And it would completely drive the economies to a halt,” said Dr. Berkley.

The vaccination drive will ensure those at high risk, particularly children and young adults, are vaccinated by the end of December.

The disease can kill the most severely affected patients within 48 hours and causes brain damage, hearing loss or learning difficulties in 20 per cent of sufferers. The most recent major outbreak, in 1996, saw 250,000 people contract meningitis, of which 25,000 died.

For its 2011-2016 programme, the GAVI Alliance plans to support immunisation efforts in all 26 countries in sub-Saharan Africa.

The Geneva-based GAVI Alliance is a public-private partnership aimed at improving health in the world’s poorest countries. Since its establishment in 2000, GAVI has financed the immunization of more than 325 million children and prevented more than five million premature deaths.