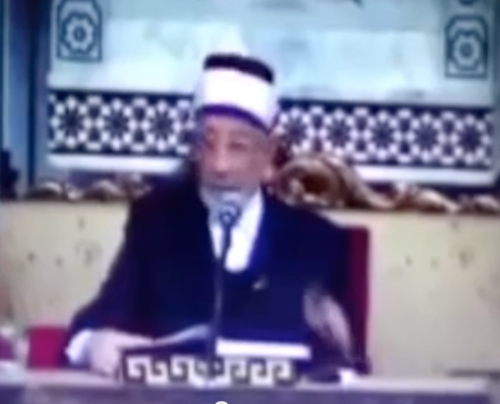 Footage posted on the Internet reveals the moment when prominent Sunni cleric, Mohammed Saeed Ramadan al-Bouti was killed in an explosion in the Imam Damascus mosque in March.

Syrian activists uploaded the video late on Monday on YouTube, which shows Sheikh preaching from his chair when a loud explosion was heard.

However, the imam is shown to be still  moving until a man approaches him blocking the camera’s view. Then, the man runs away leaving the imam bleeding from his head and mouth.

Alyunaniya could not verify the authenticity of the video.

Mohammed al-Bouti, who has been described as a top pro-regime Sunni cleric, was killed, along with 42 other people in an explosion at the Iman mosque in Damascus in March said the Sana news agency, calling it “a terrorist” blast.

State TV at that time broadcasted footage of bodies and injured people at the scene.

The Free Syrian Army, the umbrella group for the rebel forces, said it was not responsible for the attack.

Syria’s SANA news agency had also reported that the scholar’s grandson was also killed in the bombing. Syrian President Bashar Assad then condemned the attack and vowed to “cleanse” Syria of extremism.

There has been ongoing speculation, that al-Bouti was murdered and not killed by the explosion. Also according to media reports he had recently dropped his support for the Assad regime and wanted to leave Syria.