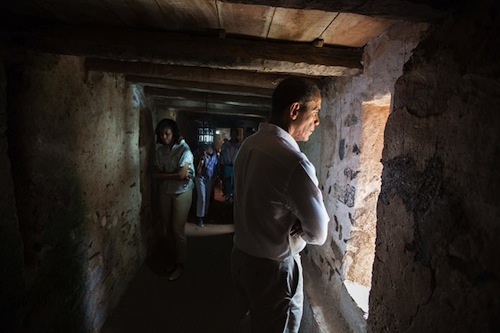 President Barack Obama’s second presidential visit to Africa kicks off in Senegal, with stops in South Africa and Tanzania. This is a good regional mix highlighting the development and governance successes that are likely to be main themes of his trip. Senegal’s peaceful political transition is additional incentive.

Obama will also send a message, though, when he flies right over some of the more strategic but controversial US allies on the continent – Ethiopia, Kenya, and Uganda. Despite strong security partnerships, these three countries have dismal human rights records, a tendency to undermine the rule of law, and accountability concerns. Maybe this snub will make a diplomatic point, but Obama needs to do much more on human rights and governance with these key African security partners.

US policy towards Africa is three-pronged – aimed at promoting development, security, and human rights. State Department officials often say they seek a balanced approach, but the truth is, human rights gets the short shrift.

Take Uganda. President Bill Clinton described President Yoweri Museveni in the 1990s as one of Africa’s “new generation” of leaders.” Recent US administrations have bolstered the Ugandan military in their efforts against the Lord’s Resistance Army and their counter-terrorism operations in Somalia, while ignoring that soldiers and police were responsible for killing protesters and other abuses at home.

Museveni, in his 27th year in power, is steadily narrowing the ability of Ugandans to ask critical questions or mount public protests about corruption, state use of land and resources and governance. Twenty activists have been arrested this year for protesting corruption and government expenditure and in May, in a blatant show of contempt for press freedom, Ugandan police closed the Daily Monitor, one of Uganda’s most important independent dailies, and several other outlets, for publishing accounts of internal schisms over Museveni’s successor.

Ethiopia presents an even starker picture. Following disputed elections in 2005, the longtime strongman, the late Meles Zenawi, used draconian laws to stifle most independent human rights work and to crack down on press freedom. Donors have muffled their response in fear of the thin-skinned government’s reaction. Ethiopia’s security partnership with the US has also played a part: the US bases aerial drones in Ethiopia and relies on its support for counterterrorism operations in Somalia.

The US has become increasingly muted on Ethiopia’s human rights record, invoking quiet diplomacy despite clear indications that such a strategy can only fail. The US, the country’s largest bilateral donor, responded only tepidly while Ethiopian civil society has been eviscerated, journalists have been convicted of “terrorism,” and Addis cracks down on peaceful Muslim protests and completely blocks independent media and human rights investigations. As donors increase direct assistance to the government, it reinforces the message that human rights abuses have no consequences.

Omitting Kenya from Obama’s itinerary was perhaps the most difficult choice, given the president’s ancestral connection and its status as a political and economic lynchpin in the region. But Kenya’s recent elections, while peaceful, resulted in victories for two politicians who were indicted by the International Criminal Court (ICC) for crimes against humanity after the last election in 2007.

Despite pledges to cooperate with the ICC, President Uhuru Kenyatta and Vice President William Ruto have expended more energy mobilizing political support to squelch the ICC cases than advancing crucial reforms to address the injustices that led to more than 1,300 deaths in 2007-2008. Given that Kenya’s leadership has perfected the art of evading accountability in domestic courts, and that the ICC cases were brought for this very reason, the irony is breathtaking.

In recent years, US policy toward Kenya has been a bit of an outlier on the continent, with an agenda based on the need for rule of law, justice, and accountability. The US has been a strong proponent of the ICC process and tried to craft a nuanced policy to support genuine reform. That kind of thoughtful approach is needed more than ever – and not just in Kenya.

Four years ago in his landmark speech in Ghana, President Obama delivered a statement that was prescient given the ensuing events in the Arab world. He said, “Africa doesn’t need strongmen, it needs strong institutions.” That line captured the concerns and aspirations of millions of Africans who hoped that Washington would use its clout with the many governments on the continent, from Angola to Ethiopia to Zimbabwe, where authoritarian leadership has routinely quashed aspirations for basic civil and political rights.

They’ve been largely disappointed. Obama’s lofty rhetoric has generally failed to translate into meaningful changes with many US allies in Africa. In Accra, he also said that “development depends on good governance,” but since that speech the US has continued to investing in security and economic development with little emphasis on human rights and the rule of law.

Skipping Ethiopia, Kenya, and Uganda is an important symbolic gesture, but the Obama administration will need to match the president’s words with tangible initiatives that do more to put the rights of African citizens and victims of abuses first, before the strongmen who claim to represent them.