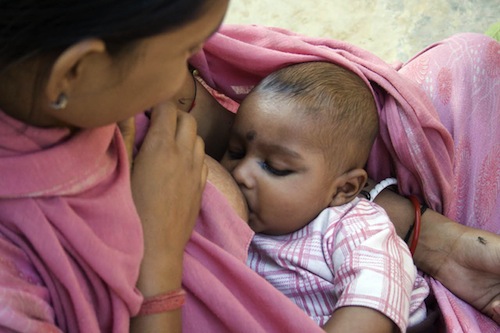 The United Nations health agency today called for ensuring that women have accurate information and support regarding the importance of breastfeeding, after a new report found that only 1 in 5 countries fully implement international guidelines about the marketing of breast-milk substitutes.

“Nearly all mothers are physically able to breastfeed and will do so if they have accurate information and support,” said Carmen Casanovas, breastfeeding expert with the Department of Nutrition for Health and Development of the UN World Health Organization (WHO).

“But in many cases, women are discouraged from doing so, and are misled to believe that they are giving their children a better start in life by buying commercial substitutes,” Dr. Casanovas said in a news release.

Breastfeeding, WHO stressed, is “the best source of nourishment” for infants and young children and one of the most effective ways to ensure child health and survival. People who were breastfed as babies are less likely to be overweight or obese later in life, less prone to diabetes and may perform better in intelligence tests.

However, globally, only an estimated 38 per cent of infants are exclusively breastfed for six months, the agency noted.

Concerned that breast-milk substitutes were being marketed to mothers too aggressively, the 27th World Health Assembly in 1974 urged member States to review sales promotion activities on baby foods and to introduce appropriate remedial measures, including advertisement codes and legislation where necessary.

This led, in 1981, to agreement on the International Code of Marketing of Breast-milk Substitutes, and the adoption of several subsequent resolutions on the matter. The new report, published ahead of World Breastfeeding Week, found that only 37 countries, or 19 per cent of those reporting, have passed laws reflecting all the Code’s recommendations.

In addition, 83 countries (42 per cent) require a message about the superiority of breastfeeding on breast-milk substitute labels, and only 45 countries (23 per cent) report having a functioning implementation and monitoring system.

The report stated that mothers are often inundated with incorrect and biased information both directly, through advertising, health claims, information packs and sales representatives, and indirectly through the public health system.

For this year’s World Breastfeeding Week, which runs from 1 to 7 August, WHO and partners are calling for more support for breastfeeding mothers. It noted, among other things, that health facilities that support breastfeeding – by making trained breastfeeding counsellors available to new mothers – encourage higher rates of the practice.The agency also pointed out that breast milk gives infants all the nutrients they need for healthy development. It is safe and contains antibodies that help protect infants from common childhood illnesses such as diarrhoea and pneumonia, the two primary causes of child mortality worldwide. Breast milk is readily available and affordable, which helps to ensure that infants get adequate nutrition.

Infant formula, WHO said, does not contain the antibodies found in breast milk. There are also risks arising from the use of unsafe water and unsterilized equipment or the potential presence of bacteria or other contaminants in powdered formula.

Breastfeeding also benefits mothers, the agency added, noting that exclusive breastfeeding is associated with a natural (though not fail-safe) method of birth control (98 per cent protection in the first six months after birth). It also reduces risks of breast and ovarian cancer later in life and helps women return to their pre-pregnancy weight faster.