Posted on: November 27th, 2014 by AlYunaniya Staff No Comments 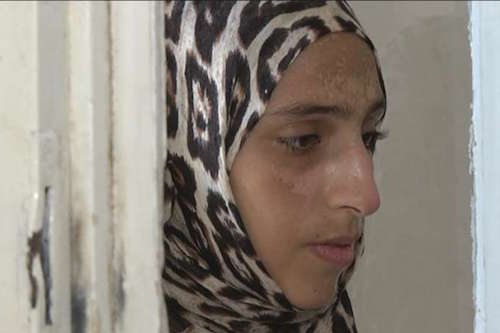 Nineteen-year-old Doaa al Zamel fled her home in Syria in the hope of finding safety and a better future; she ended up desperately fighting for her life in the Mediterranean Sea and losing her fiancé.

She still relives the trauma of September 10, when an unidentified vessel rammed into the smuggler’s trawler that was carrying Doaa and more than 500 other people, including many women and children, who dreamed of reaching Europe. The vessel quickly sank off the east coast of Malta; there were just 11 survivors.

The young woman, who showed tremendous courage in saving one baby and trying to keep another alive during the three days she spent in the water before being rescued by a Greek vessel and taken to Crete, says she is even more determined to reach Sweden where she has relatives.

But her resilience and determination to survive and to try and save others has inspired many people in Greece, including the local authorities in the Crete port of Chania, were she was taken after being rescued by a Greek Navy helicopter. People there believe that Doaa should be given Greek nationality for her bravery.

“What she did – suppressing the instinct for self-preservation and trying to save two babies – is astounding,” said Dimitris Nikolakakis, a senior public health and welfare official in Chania.

Doaa’s story begins in the south-western Syria town of Dera’a, where she was born and grew up in a family of nine. But as the war escalated, her family decided to flee to nearby Jordan in 2012 before making their way to Egypt. Doaa was just 16 at the time.

She spent two-and-a-half years in the northern Egyptian resort of Gamasa, where she worked as a seamstress to help supplement the money her father made as a barber. But Doaa believed there was no future in Syria or Egypt and so she decided, like thousands of others, to try and reach Europe by boat despite the news of ever more horrendous sinkings and deaths on the high seas.

“Three thousand people have drowned so far this year in the Mediterranean. It is unbelievable that such tragic loss of life takes place on Europe’s doorstep,” said Laurens Jolles, UNHCR’s regional representative for southern Europe.

But Doaa and her fiancé, Bassem, went ahead and found a place on a trawler that was used to smuggle refugees and migrants from Egypt to southern Europe. Four days after the trawler set sail from Damietta in the Nile Delta, it was stopped by another boat. “The people on it asked us to stop. They threw pieces of metal and wood at us and swore at our captain,” recalled Doaa. “Our boat refused to stop and they circled us and rammed us. They waited until we had sunk and they left.”

The trawler sank in minutes. Most of the passengers were below decks. “Some people grabbed ropes hanging from the ship’s masts to save themselves. Some were cut to pieces by the propeller when they fell into the water. Most drowned,” Doaa said. “We were from Sudan, Africa, Egypt, Syria, some from Libya, some Palestinians from Gaza.”

Doaa found herself in the water with 100 or so survivors, shocked and bewildered at the murderous behaviour they had just seen. She grabbed a life belt and looked around for her fiancé. She realized he must have gone down with the boat.

For three days, the survivors floated in the Mediterranean without food or drinking water. They were at the mercy of the winds and currents – and gradually they started to die. “Some people died of stress; others willed it to happen,” Doaa noted. “One man took off his own life vest and sank. Some died of fear, some of cold. The weather was rough. It was cloudy and cold.”

People began to ask Doaa to take care of their children. A man with his one-year-old granddaughter handed over the child and Doaa put it on her life belt. “Then a mother came with an 18-month-old baby girl and a six-year-old boy and asked me to take care of the baby and I kept it too. I watched the grandfather and the mother and her son die.”

Doaa said the goal of saving the two babies increased her determination to survive. She was rescued by a Liberian-flagged vessel some 90 nautical miles south-west of Crete on September 13. “The one year-old baby died just as we were about to be picked up” and taken to Chania. The other child rallied and recovered.

UNHCR’s Jolles said Doaa’s ordeal and the number of people who drowned was yet another sign of the need to do more to resolve the problem of people risking all to reach Europe. “There is an urgent need for a joint European response, based on collaboration among states and European Union support,” he said.

“For the moment, an efficient rescue operation needs to be maintained aimed at saving lives, in absence of other available alternatives,” Jolles stressed in a clear reference to the Italian Navy’s operation which has rescued 150,000 people at sea since late October 2013, including many people in need of international protection.

Doaa, meanwhile, waits alone to hear what her future will bring after such a costly journey. She was recently moved from Chania to the Greek mainland and is staying with a Greek family as the authorities try to locate her family in Sweden.