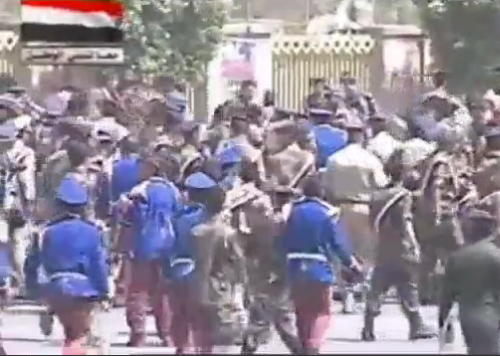 Yemeni President Abd-Rabbu Mansour Hadi is due to attend Tuesday’s parade marking the 22nd anniversary of the unification of north and south Yemen, according to Al Jazeera.

Yemen’s defense minister, Mohammed Nasser Ahmed, was there at the time of the explosion but escaped unharmed, an official told AFP.

Nobody know yet if the parade will take place as planned.   Monday’s attack is most deadly since President Hadi took power in February with who has vowed to fight al-Qaeda’s increasing presence in the county.   The suicide bombing comes 10 days into a massive army offensive against al-Qaeda in Yemen’s restive southern Abyan province, where the jihadists have seized control of a string of towns and cities in attacks launched since May last year, according to Al Jazeera.

Since the offensive began, 213 people have been killed, according to a tally compiled by AFP, including 147 al-Qaeda fighters, 31 military personnel, 18 local militiamen and 17 civilians.

Meanwhile, on Monday, the Syrian Foreign Ministry condemned  al-Qaeda which has “attacked Damascus and  Yemeni capital of Sana’a”, adding that “the blood which was shed in Yemen and the blood that was shed in Syria are one and the same.”