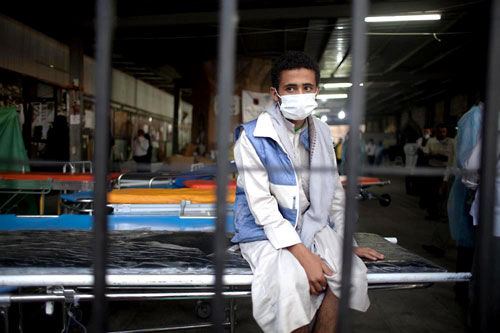 Major crises that erupted in 2011 in the Middle East and Africa, alongside existing armed conflicts and other violent situations all over the world, caused immense suffering among millions of people that lasted well into 2012 and made them heavily dependent on aid, according to International Committee of Red Cross annual report.

In addition, increasing food demand in several parts of the world continued to fuel unrest and conflict, as did the consequences of drought and floods. The worldwide economic crisis further compounded the woes felt by many.

“The speed and scale of the events of 2011, and the massive humanitarian needs that arose, set major challenges for an effective and timely response,” Jakob Kellenberger, International Committee of the Red Cross (ICRC) President, said as he unveiled the organisation’s Annual Report at a press conference in Geneva.

Attacks against medical personnel and facilities continued in many places, often resulting in a lack of safe access to health care, and proved to be an extremely serious, yet largely overlooked, humanitarian issue. ”The ICRC’s efforts to provide medical and health care for the wounded and the sick – benefiting some 6.8 million people around the world, including in Afghanistan, Somalia, Syria and Libya – were stepped up in 2011,” said Mr Kellenberger.

“Our wide-ranging activities in conflict areas and close proximity to people who need help enabled the ICRC to respond effectively to several unfolding crises, including a number of unforeseen conflicts, throughout 2011,” said the ICRC president. “In Syria, even now, together with the Syrian Arab Red Crescent, we are still the only international organization working on the ground in connection with the fighting,” he added. In many contexts, the organization stepped in to provide vital aid. Just as importantly, however, it gave people the tools to fend for themselves, without outside help.

The ICRC’s expenditures in 2011 amounted to more than 1 billion Swiss francs (approximately 1.2 billion US dollars, or 861 million euros). The ICRC’s operations in, Iraq, Sudan, Pakistan, Colombia, the Democratic Republic of the Congo, Israel and the occupied territories and Yemen – all protracted situations of violence – were among its largest in 2011, along with those in Libya.

“It was imperative that we mount a flexible, rapid and relevant response in a range of complex situations over the year. When the crisis erupted in Libya, we had staff on the spot within days,” said Mr Kellenberger. “In order to alleviate the suffering of men, women and children caught up in the fighting, it was essential to gain unhindered access to them and to engage with them,” he added. In a number of places, partnerships with national Red Cross and Red Crescent societies helped to broaden the activities the ICRC was able to undertake.

“Throughout 2011, the value of our impartial, neutral and independent approach was put to the test. However, I remain convinced that the principled approach we have adopted and the relevance of our humanitarian activities are still indispensable elements in ensuring access to people most in need” said Mr Kellenberger.