Armed conflict destroys hope of education for millions of children 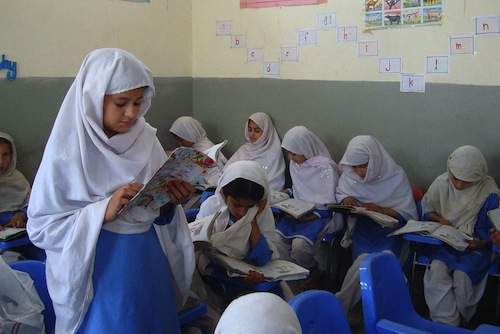 Classrooms, teachers and pupils will continue to be seen as legitimate targets unless there is tougher action against human rights violations, an overhaul of global aid priorities and strengthened rights for displaced people, a new report by the United Nations educational agency warns, urging action on behalf of 28 million children out of school in the world’s conflict zones.

A new paper launched today by the UN Educational, Scientific and Cultural Organization’s (UNESCO) Education for All Global Monitoring Report shows that half of the 57 million children out of school live in conflict-affected countries and that urgent action is required on several key fronts to address their needs.

Globally, the number of children out of school has fallen from 60 million in 2008 to 57 million in 2011. However, the report underscores that the benefits of this slow progress have not reached children in conflict-affected countries; they now make up 50 per cent of children who are denied an education, up from 42 per cent in 2008. More than half of those struggling to get an education in conflict-affected countries are women and girls.

The paper is being released in partnership with Save the Children to mark the 16th birthday of Malala Yousafzai, the Pakistani schoolgirl and education rights activist shot by the Taliban in October 2012. The day has is being commemorated as “Malada Day,” and, in her first major public appearance since the incident, Ms. Yousafzai is set to address the UN General Assembly in New York as keynote speaker of the world body’s Youth Assembly.

The paper, Children battling to go to school, shows that 44 per cent of the of the 28.5 million children affected live in sub-Saharan Africa, 19 per cent in South and West Asia and 14 per cent in the Arab States. The vast majority – 95 per cent – live in low and lower-middle income countries. Girls, who make up 55 per cent of the total, are the worst affected, as they are often victims of rape and other sexual violence that accompanies armed conflicts.

“Education seldom figures in assessments of the damage inflicted by conflict,” said Irina Bokova, Director-General of UNESCO. “International attention and the media invariably focus on the most immediate images of humanitarian suffering, not on the hidden costs and lasting legacies of violence. Yet nowhere are these costs more evident than in education.”

The UNESCO chief said that across many of the world’s poorest countries, armed conflict continues to destroy not just school infrastructure, but also “the hopes and ambitions of a whole generation of children.”

The 2013 paper also shows that the share of humanitarian aid for education has declined from 2 per cent in 2009 to just 1.4 per cent in 2011. Not only does it receive a small share overall, but it also receives the smallest proportion of the amount requested from humanitarian aid of any sector: in 2010, of the modest amount requested for education in humanitarian crises, just over a quarter was actually received, leaving a funding gap of around $220 million.

“The decline in humanitarian aid for education is especially bad news because funds are needed more than ever,” said Pauline Rose, Director of the Education For All Global Monitoring Report.

“There are more refugees now than there have been since 1994; children make up half of those who have been forcibly displaced. Nowhere is this more painfully visible than in Syria today,” she said, adding that those girls and boys “face a disruption of their learning process at a critical time – and the risk of a lifetime of disadvantage as a result.”

The UNESCO panel compiled testimonies from a few young boys and girls to vividly illustrate this point, including a 16-year-old Syrian refugee living in Lebanon who has been unable to graduate because of the war raging in his home country. Aware that schools are being targeted and children are being killed on their way home from their classes, he says in the report: “Now students do not go to school because when they did, there were shells… this war stopped me from graduating and now my future is destroyed.”