Bahrain cracks down on opposition ahead of Formula 1 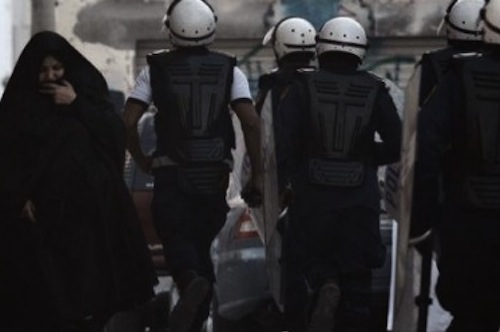 International racing bodies responsible for scheduling the Bahrain Formula 1 Grand Prix from April 19 to 21, 2013, have taken no steps to address human rights abuses that appear to be directly linked to the event. Bahraini security forces killed a protester during the 2012 Grand Prix and have increased their repressive actions in the lead-up to the 2013 race.

In recent weeks, security forces have conducted home raids in the vicinity of the race circuit and arbitrarily arrested and detained opposition figures. Protesters have indicated they will demonstrate against the Grand Prix, with the risk that the Bahraini authorities will use repressive measures to close down the protests.

“Bahrain is already tightening the lid on protest as the Formula 1 race grows near,” said Sarah Leah Whitson, Middle East director at Human Rights Watch. “The Formula 1 organizers apparently prefer to bury their heads in the sand, risking holding their race against repression it has provoked.”

Human Rights Watch said it was unaware of any public comment by Formula 1 organizers about the recent spate of security force abuses near the race site.

Since large-scale protests began in 2011, abuses by security forces have resulted in the death of scores of protesters and bystanders, serious injuries to hundreds of people, arrests of thousands more, and more than 300 formal allegations of torture and ill-treatment. In February, Human Rights Watch concluded, based on discussions with officials, that authorities have made no progress in investigating and prosecuting higher-level officials responsible for the worst abuses during the 2011 protests.

On May 26, 2011, Human Rights Watch wrote to the chairs of the Federation Internationale de l’Automobile and the Formula One Teams Association, Jean Todt and Martin Whitmarsh respectively, to urge that they and their member organizations take into account the severe human rights crisis in Bahrain and consult the Organization for Economic Cooperation and Development Guidelines for Multinational Enterprises. Human Rights Watch has not been able to determine that either body has taken any steps to assess the ramifications of their current involvement in Bahrain.

During protests that took place on April 21 during the 2012 Grand Prix, Bahraini security forces killed Salah Abbas Habib, a protester, in the town of Shakhoura. A November 2012 follow-up report by the Bahrain Independent Commission of Inquiry concluded that Habib “was arrested and assaulted, and then shot with [a] shotgun” by security forces.

The chief prosecutor of Bahrain’s Special Investigations Unit announced on April 8 that his office had charged a police officer with wilful homicide in Habib’s case, but the case exposes the dangers that protesters face in confrontations with security forces and criminal charges in cases such as these are the exception.

In stark contrast to impunity for security forces, Bahrain’s justice system has prosecuted peaceful protesters, Human Rights Watch said. On January 7, the Court of Cassation upheld the convictions and lengthy prison terms of 13 prominent dissidents, of whom seven were sentenced to life in prison, solely for exercising their rights to free expression and peaceful assembly in the 2011 protests.

Between April 1 and April 10, security forces conducted a series of home raids and arbitrarily detained opposition protestors in Dar Khulaib, Shahrakan, Madinat Hamad, and Karzakkan, towns close the Bahrain International Circuit. During the raids, plain-clothes, masked, and armed police officers arrested at least 20 people, some of them prominent and well-known anti-government protesters.

“The inconvenient reality for Formula 1 organizers is that their event in Bahrain has become a focal point for popular discontent, with abuses against protesters ratcheting up in a country that has become notorious for them, and is unwilling or unable to implement meaningful reforms,” Whitson said. “And those who care about Formula 1 officials should care that human suffering and repression is tainting their sport.”