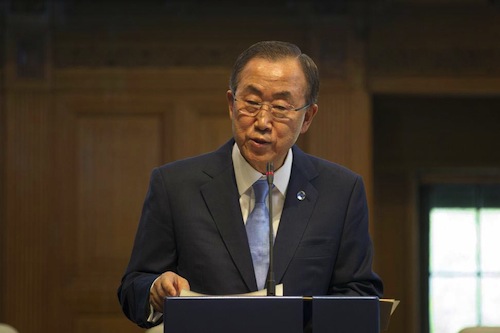 As the latest escalation in Syria “has raised the spectre of chemical warfare,” Secretary-General Ban Ki-moon urged members of the Security Council to explore all diplomatic options to bring all Syrian parties to the negotiating table, stressing there is no military solution to the crisis.

“We must pursue all avenues to get the parties to the negotiating table,” Mr. Ban said in his remarks at a ceremony marking the centennial of the Peace Palace in The Hague

“Here in the Peace Palace, let us say: Give peace a chance. Give diplomacy a chance. Stop fighting and start talking.”

Mr. Ban called on the Security Council to uphold its moral and political responsibilities under the UN Charter by ensuring a peaceful solution through unified action.

“Syria is the biggest challenge of war and peace in the world today. The body entrusted with maintaining international peace and security cannot be missing in action,” he said. “The Council must at last find the unity to act. It must use its authority for peace.”

Mr. Ban said that the use of chemical weapons under any circumstances would constitute “an atrocious violation of international law,” and added that UN inspectors on the ground are currently investigating the matter and must be given time to establish the facts and show their findings.

“Just days after the attacks, they [inspectors] have collected valuable samples and interviewed victims and witnesses. The team needs time to do its job,” Mr. Ban said.

Mr. Ban emphasized that there is no military solution to the conflict, noting it would only add to the violence inside the country.

“To those providing weapons to either side, we must ask: what have those arms achieved but more bloodshed? The military logic has given us a country on the verge of total destruction, a region in chaos and a global threat. Why add more fuel to the fire?”

The Secretary-General expressed his support for the efforts of the Joint Special Envoy for the Arab League and the UN, Lakhdar Brahimi, who has been working with United States and Russian officials to bring the parties together at a proposed conference in Geneva to find a political solution.

“This palace is by function a seat of law. But in name, it speaks of peace. When I think of peace today, my thoughts turn to countries and especially people caught in conflict,” the Secretary-General continued.

He noted the situation in the Democratic Republic of the Congo (DRC) and underscored that the United Nations continues to strongly support the recent peace agreement that gives the region its best chance to end the years-long cycle of violence.

As for Egypt, where violence and polarization have brought bitter winds to the Arab Spring, he appealed to all Egyptians to show maximum restraint, revive the political process and resolve differences peacefully through dialogue.

Mr. Ban also made remarks at the opening of the ministerial Conference on the peaceful Settlement of Disputes, where he told the gathered participants that the UN Charter requires all Member States to settle their international disputes by peaceful means and that it offers clear directions on how to achieve this. Article 33 sets out a number of methods, including judicial settlement, arbitration and mediation.

“The Charter gave the world the International Court of Justice (ICJ). Member States may bring virtually any international dispute to the [Court],” said the Secretary-General, underscoring that the judges have brought clarity and wisdom to a great array of issues – maritime disputes, environmental damage, international humanitarian and human rights law, and the application of many conventions and treaties.

The Court’s caseload has grown in recent years, reflecting Member States’ increasing confidence in its value. And its cases have become more complex. He said that the ICJ’s judgements benefit the States that are directly affected. And collectively, these judgements have made an enormous contribution to the development of international legal jurisprudence.

“I applaud all those States that have taken the high road of justice and settled their disputes peacefully at the ICJ. When countries submit to the jurisdiction of the Court, they enhance international stability, he said, calling on all States that have not yet accepted the ICJ’s jurisdiction to do so as soon as possible as a way to fortify the international legal order.