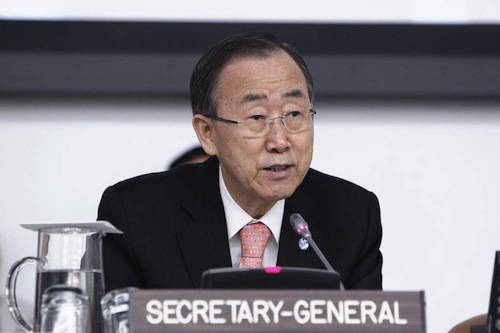 Noting its collaboration with the United Nations, Secretary-General Ban Ki-moon congratulated the European Union (EU) for being awarded the 2012 Nobel Peace Prize, stressing its role in helping to build peace, promote human rights and support economic and social development across the world.

“Today, an indispensable partner to the United Nations has been given a richly-deserved recognition of its accomplishments and its importance in Europe and around the world,” Mr. Ban said in a statement.

“The European Union has more than lived up to its founding dream of forging a united and peaceful continent out of the devastation of two world wars,” he added. “It has become an engine of integration, weaving together nations and cultures.”

Nobel judges, announcing the decision in Oslo, Norway, earlier Friday, cited the EU’s contribution for over six decades “to the advancement of peace and reconciliation, democracy and human rights in Europe,” adding that while the region may be undergoing grave economic difficulties and social unrest, the prize focuses on recognizing its role in transforming Europe from “a continent of war to a continent of peace.”

“[The EU’s] achievement of peace within its borders, building on innovative mechanisms for dialogue and the rule of law, is a model to be emulated the world over. Its unifying potential is all the more important in today’s economic climate,” Mr. Ban said.

The Secretary-General also noted that at the UN “we count every day on the EU’s involvement, its leadership and its contributions as we work to meet the most pressing challenges of our time,” ranging from poverty, humanitarian assistance, human rights and conflict prevention.

He added that he looks forward to deepening the partnership between both institutions.