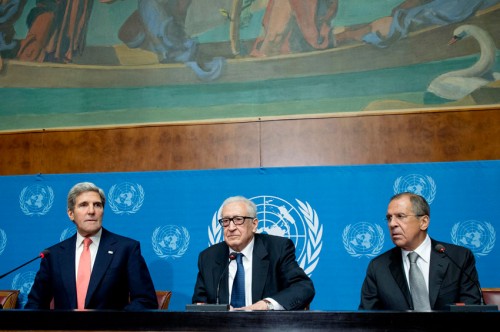 Pressing ahead with his efforts secure a diplomatic solution that would end to more than two years of bloodshed in Syria, United Nations-Arab League Joint Representative Lakhdar Brahimi hosted a meeting between senior officials from Russia and the United States on devising a political path forward, in Geneva yesterday.

At a press conference held at UN Headquarters in Geneva after the meeting, Mr. Brahimi spoke alongside Russian Foreign Minister Sergei Lavrov and United States Secretary of State John Kerry. The two Government officials have been meeting in Geneva since Thursday discussing a Russian proposal for Syria to place its chemical weapons under international control.

“The work you are doing is extremely important in itself … but also important for all those working with you to bring forward the Geneva conference successfully,” Mr. Brahimi told reporters, referring to the long-proposed international peace conference on Syria commonly referred to as “Geneva II.”

Mr. Brahimi has been hard at work on the diplomatic front to bring the conference to fruition, including in discussions last week at the G20 Summit in St. Petersburg. The goal of a second Geneva conference would to be to achieve a political solution to the conflict through a comprehensive agreement between the Syrian Government and the opposition for the full implementation of the Geneva communiqué, adopted after the first international meeting on the issue on 30 June 2012.

In his comments, Mr. Kerry thanked the United Nations and Mr. Brahimi for hosting discussions on Geneva II. Those discussions have been productive and timely, as he and Mr. Lavrov were meeting on Russia’s recent initiative to “gain control of, remove and destroy chemical weapons in Syria and we would both agree that we have constructive conversations.”

“President is Obama is deeply committed to a negotiated solution and we know that Russia is likewise. We are working hard to find common ground to make that happen. We have both agreed to do homework required to make it happen,” Mr. Kerry said, announcing that he and Mr. Lavrov planned to meet in New York during the general debate of the UN General Assembly, which will open on 24 September.

While the two leaders would further consider the matter, including possibly settling on a date for the Geneva II conference, much of the way ahead “will depend on achieving success in the next hours and days” on the question of Syria’s chemical weapons, Mr. Kerry said.

“Both of us, Sergei Lavrov and I, our countries, our Presidents, are deeply concerned about the death toll and destruction and the acts on all sides that are creating more and more refugees, more and more of a humanitarian catastrophe,” he said, adding that the two Governments were committed to working together.

Speaking next, Mr. Lavrov said that now that Syria has signed the legislative decree providing for the accession of Syria to the Convention on the Prohibition of the Development, Production, Stockpiling and Use of Chemical Weapons and on their Destruction, “we have to engage our professionals … and the United Nations to design a road so that the issue is resolved quickly, professionally as soon as practical.

“We are very glad that Mr. Brahimi has invited us to discuss a longer term goal for Syria, namely preparations for the so-called Geneva II conference. From the very beginning of the Syrian conflict, Russia and the Russian President have been promoting a peaceful resolution,” he said.

Mr Lavrov noted that Russia had initiated of the conference from which had emerged the Geneva communiqué agreed and signed “by nearly all the major players, including the United Nations, countries in the region and the P-5 [the permanent members of the Security Council].”

“It is very unfortunate that for a long period the communiqué was basically abandoned and we were not able to have Security Council endorsement of the very important document as is,” he said, thanking Mr. Kerry for his efforts to re-energize the communiqué and work with Russia towards its implementation including through the holding of a new Geneva conference. He said he was very grateful for the discussions with Mr. Brahimi.

Meanwhile, the President of the UN Human Rights Council, which is currently in session in Geneva, issued a letter to both Mr. Lavrov and Mr. Kerry drawing their attention o the work of the independent international commission of inquiry on Syria, which the Council established in 2011.

The Council President, Ambassador Remigiusz Henczel of Poland stressed that the commission had yet to be granted access to Syria, despite repeated calls on Damascus to allow the experts to enter the country. The Council President suggests that the Russian and US officials might take up the matter during the scope of their meetings in Geneva.

The commission presented its latest report to the Human Rights Council on Monday, citing ongoing incidents of murder, rape, torture, widespread attacks on civilians and hostage-taking committed by Syrian forces and anti-Government armed groups. It said that “the perpetrators of these violations and crimes, on all sides, act in defiance of international law. They do not fear accountability.”

The panel, which described Syria today as “a battlefield [where] massacres are perpetrated with impunity [and] and untold number of Syrians have disappeared,” reported that Government and pro-Government forces in Syria have continued to conduct widespread attacks on the civilian population with impunity, committing murder, torture, rape and enforced disappearance as crimes against humanity, stressed that there is no military solution to the conflict.