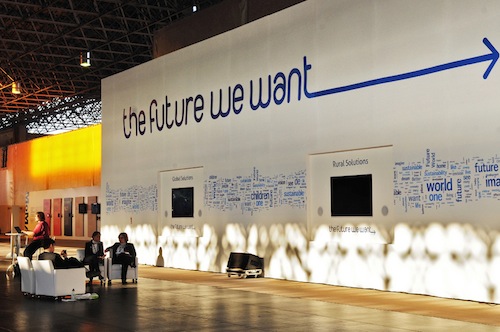 As delegates continued negotiating the outcome agreement document for the United Nations Conference on Sustainable Development (Rio+20), thousands of civil society representatives took part in side-events to discuss the economic, social and environmental issues at the heart of the Conference.

Members of the event’s Preparatory Committee are due to finish negotiations on the outcome document on Friday. Yesterday, the Rio+20 Secretary-General, Sha Zukang, urged them to take advantage of the new format whereby members split into various groups to better focus on different areas and accelerate the deliberation process.

“We are hoping that the multiplicity of contact groups speeds up negotiations so that we have closure on this as soon as possible,” the Rio+20 Head of Office, Nikhil Seth, told reporters in Rio de Janeiro, Brazil, today.

More than 100 heads of State and government, along with thousands of parliamentarians, mayors, UN officials, chief executive officers and civil society leaders are expected to attend Rio+20’s high-level meeting, from 20 to 22 June, to shape new policies to promote prosperity, reduce poverty and advance social equity and environmental protection.

In an interview, Mr. Seth described the atmosphere during negotiations on the outcome document as “extremely positive,” even though there are concerns that they are happening too slowly, with just one day left to reach an agreement.

“The atmosphere is very friendly and consensus-inducing,” Mr. Seth said. “The major problem is that progress is somewhat slow, that they [delegates] are not rapidly coming to a conclusion on many of the paragraphs.”

“We are here to try to engage young people with the conference and get them to tell legislators and world leaders to stick to the promises they have made, and get them to renew their commitments on marine protection,” Ruth Desforges from the Zoos Zoological Society of London said in an interview. “We are heading to more youth events this afternoon and we are particularly excited about the global youth music contest on Saturday.”

Over 500 side-events are set to take place over the coming days, with people from all over the world attending talks, panels and workshops on range of issues. Many are also taking the opportunity to form partnerships and share knowledge.

“The networking opportunities are enormous and you have a chance to learn from people that work in similar or totally diverse fields,” said Illene Pevec from Susila Dharma International, an NGO working on small grassroots projects in various developing countries.

“I went to a meeting on youth engagement on development issues which was run by the Girls Scouts Association and that was by far the best meeting, because the young people do not have any power so they feel free to be honest and say exactly what is going on,” she added. “It is far more interesting to be with people that do not have a political line to follow. I always learn a lot.”

The General-Secretary of the International Trade Union Confederation, Sharon Burrow, who participated in a press briefing on decent jobs and health for workers earlier Thursday, said the conference was a platform for workers to be heard by world leaders.