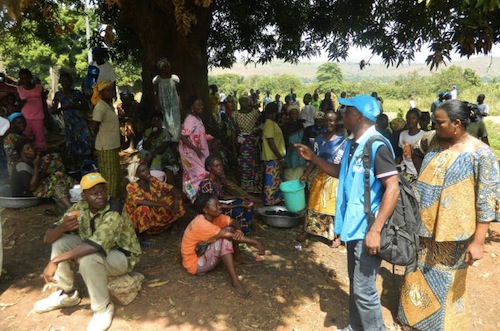 The Security Council voiced strong concern over the deterioration of the security situation in the Central African Republic (CAR), where renewed fighting is threatening civilians and the fragile peace reached earlier this year.

Council members “condemned the attacks conducted recently by rebels from the ‘Séléka’ coalition, in particular in Bangassou and the surrounding region, and the threat of a resumption of hostilities,” Ambassador Vitaly Churkin of Russia, which holds the rotating presidency of the Council for this month, said in a statement read out to the media.

“The members of the Security Council also condemned the threats by militias and related movements against civilians and called upon all actors, including the media, to refrain from inciting violence,” he added.

Fighting flared up again in CAR in December 2013 when the Séléka rebel coalition launched a series of attacks. The fighters took control of major towns and were advancing on the capital, Bangui, before agreeing to start peace talks under the auspices of the regional group known as the Economic Community of Central African States (ECCAS).

A peace agreement was reached on 11 January, resulting in a ceasefire agreement and creating a government of national unity in which opposition figures were given key posts, but the rebels claim the Government is failing to live up to its commitments. The rebels have resumed their attacks, and have overrun a wide swathe of the country’s territory.

“Séléka now controls three–quarters of the country,” Margaret Vogt, Special Representative of the Secretary-General for CAR, told reporters after briefing the Security Council in a closed-door session.

She reported that rebel members of the Government of National Unity decided to withdraw from the Government two days ago and “went back into the bush” and issued an ultimatum, laying down a number of conditions that had to be met without which they would resume fighting.

“The ultimatum ended today and the indication we got was that they were prepared to allow a bit more time for negotiations to take place,” she said, adding that the UN is working very actively with ECCAS, which is the custodian of the 11 January peace agreement.

“As we all know, governments of national unity are extremely difficult to implement,” noted Ms. Vogt. “They’re rife with all sorts of tension and the situation has not been made easier by the fact that we have a rebellion that controls three-quarters of the country.

“We have a government with a military force that is in disarray and we have a regional organization that has very, very generously deployed a force on the ground, but with limited capacity. A lot would now need to depend on persuasion, on mediation, on political facilitation, and this is the report we brought to the Council.”

In a news statement, Council members reiterated their call to the Government, the Séléka coalition, armed groups and the democratic opposition to abide in good faith by their commitments pursuant to the various agreements they have concluded.

Ms. Vogt stressed that of vital importance is the impact of all of these developments on the people, adding that there are a lot of human rights violations, assaults on the population, looting, sexual exploitation, and recruitment of children. “At the best of times, the record in the CAR was not good but it is exponentially worse,” she said.

What makes the situation even more complex, she added, is that Séléka has now moved to the south-west of the country, where the Ugandan rebel group known as the Lord’s Resistance Army (LRA) is operating.

“So you have people who suffer from the LRA attacks, and [are] now again being exposed to atrocities committed by the rebellion. It’s just too much.”