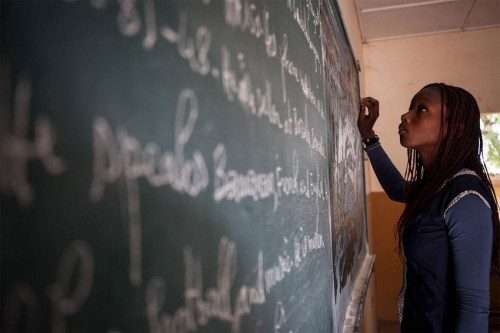 The education of some 700,000 children in Mali has been disrupted due to the violence in the country, the United Nations Children’s Fund (UNICEF) said today, adding that there is an urgent need to rebuild schools, train teachers and provide learning supplies.

Northern Mali has been occupied by radical Islamists after fighting broke out in January 2012 between Government forces and Tuareg rebels. The conflict uprooted hundreds of thousands of people and prompted the Malian Government to request assistance from France to stop the military advance of extremist groups.

Since the violence began over a year ago, at least 115 schools in the north were closed, destroyed, looted and sometimes contaminated with unexploded ordnance. Of the 700,000 children affected, 200,000 still have no access to school, UNICEF said in a news release.

Many teachers were among those displaced and have not returned to the northern part of the country. Instead, they are working in the already overcrowded schools in the south, which cannot cope with the amount of displaced students from the north.

“When a teacher is afraid to teach and when a student is afraid to go to school, the whole education is at risk,” said UNICEF’s Representative in Mali, Françoise Ackermans.

In the north, only one in three schools is now functioning. In some towns, all schools remain closed, as is the case in Kidal, while in others a few have opened. Five per cent of schools have now reopened in Timbuktu.

UNICEF noted that the violence has also had a significant psychological impact on children, who have reported hearing gunshots at school and at home.

The agency said it is working with the Malian educational authorities to accelerate the return of children to school. Since December, UNICEF has trained 1,190 Malian teachers to provide psychological support and mine-risk education to children. In addition, more than 16,000 children have received educational materials across the country.

Other UN agencies have continued to work in Mali to assist the estimated 1.2 million people that have been affected by armed operations.

The World Food Programme (WFP) today opened a new land route to transport food supplies from Niamey, Niger, to some 24,000 people in northern Mali. Trucks have already delivered 200 metric tons of food to the Menaka town, and more convoys are on the way.

“We are actively expanding our logistics capacity to overcome access challenges in northern Mali,” said WFP Country Director Zlatan Milisic. “Our next priority is to send more food to Kidal, hopefully in the next few days. And if we cannot reach certain areas by road or river, we will be ready to launch an air operation.”

In a news release, the agency said it was concerned that some areas remain inaccessible due to the volatile security situation and the risks of landmines and attacks. In addition, markets remain closed, food prices keep rising and people are using up their remaining food stocks. All of these factors have increased the risk of a food crisis.

WFP said it is working with various partners to increase its response on the ground over the next few weeks, but expressed concern that the process would not be as fast with the population’s needs growing every day.

“We are worried that food is being consumed faster than it can be replaced, because of the serious lack of domestic trade and commercial imports,” said Mr. Milisic, adding that over a third of the population in northern Mali was already dependent on food assistance before the military intervention.

The agency said it plans to assist more than half a million people this year through cash distributions, programmes to prevent and treat malnutrition, and emergency school meals.

Meanwhile, the UN Office for the Coordination of Humanitarian Affairs (OCHA) said the situation in the country remains highly volatile, with at least 16,000 newly displaced people since the beginning of the year.

Mr. Laerke noted that only 4 per cent of the $373 humanitarian appeal for Mali has been received so far – some $15.6 million.