Cyprus scrambles for ‘Plan B’ while banks remain shut 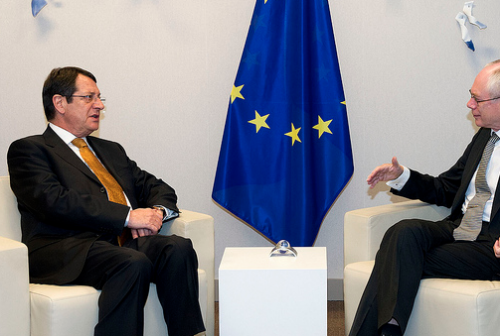 The Cypriot government was frantically trying yesterday to come up with a plan that would provide enough financing to secure new terms for a bailout from the Eurozone and the IMF that would prevent its banking system and economy from collapsing, Kathimerini writes.

Meanwhile, the near-bankrupt member of the eurozone has closed its banks until Tuesday.

Talks between President Nicos Anastasiades and the troika of lenders in Nicosia proved inconclusive yesterday as Cyprus’s overtures to Russia for financing also failed to yield results.

According to Financial Times, Russian prime minister Dmitry Medvedev did not rule out possible support for Cyprus but said talks would continue with European Commission officials, including president José Manuel Barroso, in a pre-planned meeting today in Moscow.

In the most detailed comments yet from Moscow on the bailout plan voted down by the Cyprus parliament on Tuesday, Medvedev said the EU and Cyprus had acted “like an elephant in a China shop”.

The cabinet meeting of Cyprus under the President of the Republic, Nikos Anastasiadis will meet again today, as the process for the approval of several bills, were not completed yesterday.

Troika rejected the alternative plan of Cyprus, which provided for the finding of EUR 5.8 billion that would come from the haircut of deposits, from internal sources, media have suggested. The various solutions include the use of reserves from Cypriot insurance funds and the imposition of an emergency “assistance fee” to Cypriot taxpayers.

However, latest reports coming from the island earlier this morning suggest that an agreement is close, since the Cypriot government has agreed with the troika representatives on a viable Plan B.

More specifically, according to tovima.gr, Laiki Bank will close replaced by a new ‘good bank’ to save EUR 2 billion. Cash reserves of insurance funds of public sector employees will provide another EUR 2.8 billion, whilst the remaining EUR 1 billion could come from a small haircut of deposits, around 1-1.5%, that corresponds to interest gained in the last few years.