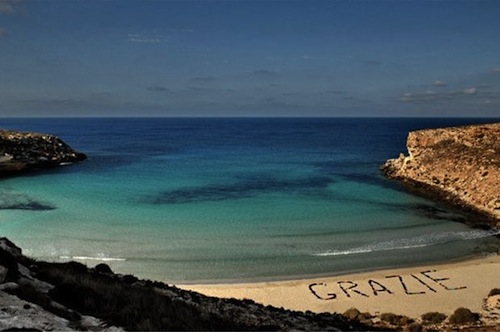 As Amnesty International prepared to carry out a major action on the Italian island of Lampedusa, it called on the EU to focus on rescuing and helping people who arrive sick and destitute on its shores, rather than constantly reinforcing its borders in an attempt to keep them out. The organisation has also criticised Italy for reinstating a controversial agreement with Libya on handling migrants, refugees and asylum-seekers and is pressing the EU finally to stop its member states from flouting their obligations under international law.

“In 2011 the Italian Government caused the crisis in Lampedusa by failing to transfer people to the mainland. Europe left the islanders utterly alone as they valiantly strove to help all those arriving”, said Nicolas Beger, Director of Amnesty International’s European Institutions Office. “This was certainly a crisis for a tiny island, but a very minor challenge for the vast resources of Europe.”

“Despite taking only a tiny proportion of the world’s refugees, EU countries have turned a blind eye to the immense human suffering and are instead spending billions to prevent people reaching this continent”, said Beger. “People are dying on our doorstep. Shouldn’t we help them rather than continuing to force them back?”

Activists from 20 countries have gathered on the island which last year received thousands of migrants and refugees arriving from North Africa. Islanders and activists will march into the sea to form a giant ‘SOS’ addressed to the authorities in Europe and Italy. They will highlight the suffering of those who arrive in overcrowded boats and the need urgently to reverse European migration policy. The action will also commemorate the heroic efforts by Lampedusa’s 6,000 inhabitants.

Last week, 54 people died of thirst after their boat was stranded in the Mediterranean. Some 1,500 died in 2011 attempting to cross that sea despite shipping and aircraft surveillance reaching record levels with NATO’s intervention in Libya.

“Despite promising to act transparently, in April Italy signed another shameful secret agreement with Libya, perpetuating the previous government’s policy. Libya continues to torture and persecute refugees and migrants on its territory“, said Beger.