Posted on: April 13th, 2013 by Dimitris Ioannou No Comments 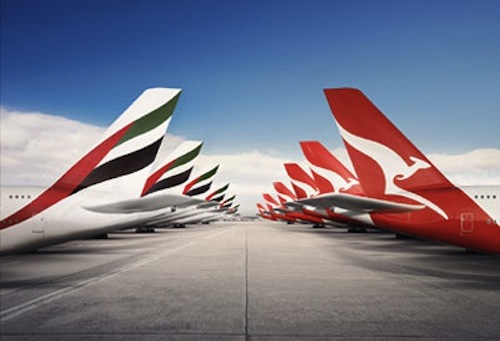 Emirates and Qantas have marked the official start of their historic partnership on April 1, with the first Qantas flights departing from Sydney and Melbourne to London via the international hub of Dubai.

According to an announcement, the partnership marks a new era for Qantas and Emirates, and for global aviation, as the two carriers collaborate to deliver the best network, lounges, frequent flyer benefits and travel experiences.

“The strength of this partnership stems from the fact the Emirates and Qantas brands are an excellent match. Emirates customers using a Qantas lounge or taking a Qantas flight will experience a level of service that is on par with what they expect from Emirates,” said Tim Clark, President Emirates Airline.

“Our two airlines offer the largest joint fleet of Airbus A380s and passengers will be welcomed through Concourse A, the world’s first, purpose built A380 concourse, at Dubai International Airport, which is the geographical centrepiece of the partnership,” Clark added.

“A major benefit is the range of products we are offering frequent flyers. Customers of either airline can leverage many of their privileges when they fly on the joint network, including earning points, redeeming flights and accessing lounges,” Clark concluded.

Chief Executive Officer of Qantas, Alan Joyce, said the partnership would make long haul travel more seamless – and faster – for millions of Australians. “Our customers from Adelaide, Brisbane, Perth, Melbourne and Sydney have one-stop access to 65 destinations in the Middle East, North Africa, the UK and Europe via the joint Qantas and Emirates network. “By travelling through Dubai, Qantas customers can connect to the extensive Emirates network into Europe and the UK and fly directly to their destination,” Joyce said. “The new network will cut average journey times by more than two hours from Melbourne and Sydney to the top 10 destinations in Europe,” he added.

Combined the two airlines will offer 98 flights a week between Australia and Dubai.