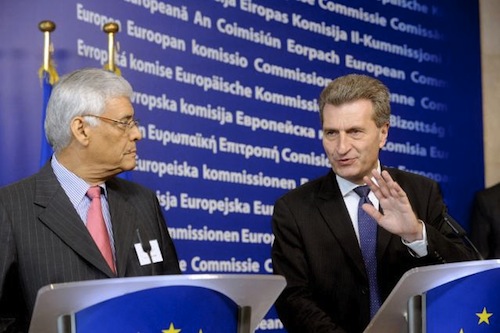 The ninth Ministerial-level meeting of the energy dialogue between the European Union (EU) and the Organization of the Petroleum Exporting Countries (OPEC) took place in Brussels today.

Representatives of OPEC included: HE Hani Abdulaziz Hussain, Minister of Oil, Kuwait, heading the OPEC delegation and acting for the President of the OPEC Conference; Falah J. Alamri, Iraqi Governor for OPEC, on behalf of HE Abdul-Kareem Luaibi Bahedh, President of the OPEC Conference, Minister of Oil, Iraq; and Abdalla Salem El-Badri, Secretary General of OPEC.

Participants recognised the fact that this year’s meeting was taking place against the backdrop of very challenging economic developments in many regions of the world, with knock-on implications for the global energy sector and some oil-producing regions. All this continues to have a profound impact on the Member Countries of both parties to the dialogue. Significant oil price volatility, with prices trending higher in the first quarter of this year and then falling back more recently, reinforce the need for continuous market monitoring and for closer consumer-producer cooperation in the framework of energy dialogues, such as that between the EU and OPEC. The stable relations achieved via this dialogue have allowed both parties to remain focussed, particularly in challenging times, on constructive exchanges to foster market stability in the interests of both producers and consumers.

Since the Energy Dialogue’s inception, advances have been made in several areas to assess the drivers behind oil, gas and fuel market developments, as well as expected possible futures. This has involved more frequent contacts between the parties; encouraging greater awareness of the collective responsibility of all stakeholders when it comes to handling the industry’s evolving challenges and opportunities.

This is particularly important as changing patterns in supply, demand, trade and prices for both oil and gas emerge. It is essential to better understand the short-, medium- and long-term trends of these market fundamentals, which have an impact on appropriate and necessary investments to be made.

During his introductory keynote speech, the EC Commissioner for Energy, Günther Oettinger, stressed the negative impact that very high oil prices can have on the global economy, especially in times of a fragile recovery and cautioned against reduced investments in infrastructure and exploration and production capacities that may lead to future supply bottlenecks. The Commissioner commended OPEC’s proactive stance in responding to market needs and invited OPEC to join the EU in efforts to assess the impact of major events and policy changes, such as the recent developments of major North American shale plays, and the possibility of these spilling over to other regions. Commissioner Oettinger further emphasized the need for further transparency in oil and gas markets, the need for cooperation towards creating a broader energy base and the role technology and research can play in this as another area of possible useful joint cooperation.

Hani Abdulaziz Hussain, Minister of Oil, Kuwait, in his opening address, highlighted that uncertainty throughout the global economy, particularly in the Euro-zone, coupled with excessive speculation in global financial markets, was behind much of the recent price volatility. He said that he hoped for a solution soon to the Euro-zone’s current economic predicament, and in terms of speculation, he looked forward to a strengthening of financial regulation and increased oversight of the ‘paper markets’. The Secretary General of OPEC, Abdalla Salem El-Badri, highlighted the importance of a stable price, for both producers and consumers; one that is conducive for global economic growth and, at the same time allows producers to invest to meet future demand. He emphasised that low oil prices can break the momentum of investment in the oil industry, and in other forms of energy too. This then has a knock-on impact on future additional supply. He then reiterated OPEC’s commitment to supporting market stability in making sure consumers have secure and stable supplies, but emphasized the importance of understanding the other side of the equation: security of demand.

The market outlook was elaborated upon in the first session of the meeting, which looked at oil market developments, energy policies and the long-term outlook.

A presentation was given by the EU, providing an overview of the latest set of policies recently adopted by the Commission with a particular emphasis on the internal energy market and the Energy Roadmap 2050. On the latter, the need to move towards a broader energy base by 2050 was outlined, as well as the important role oil and gas will continue to play in that context. Based on these policies, energy demand projections for the EU-27, specifically oil demand, were also presented up to 2050.

OPEC then took the floor to highlight recent oil market developments and prospects, which featured the various uncertainties, such as debt burdens and high unemployment that still exist around the global economic recovery, albeit with varying effects across regions. The slowdown in a number of economies has become more visible with a notable deceleration through declining trade activity and financial instability. It was shown that oil demand in the world is set to witness steady growth, driven mainly by contributions from major developing countries, although policies aimed at alternative fuels, efficiency and higher taxes are viewed as a significant demand risk. On the supply side, the physical market continues to be supported by adequate growth in major producing regions, as well as appropriate stock levels. Additionally, OPEC spare capacity remains effective in lessening market pressures.

A presentation by the EU then followed, giving an overview of the recent economic and financial developments in the EU and Euro-zone area, based on the spring 2012 European Commission economic forecasts that were adopted in May. Key issues addressed were tensions in global sovereign-debt markets and high oil prices, both of which were said to contribute to a loss of confidence towards the end of 2011 and the EU’s subsequent output contraction. Advancements in the EU institutional framework to counter those developments were equally covered.

OPEC closed the session with an assessment of the long-term oil outlook, which underlined that oil will remain the leading fuel type in satisfying the world’s growing energy needs for the foreseeable future and that resources are clearly sufficient. Moreover, OPEC is investing in accordance with perceived demand for its crude. Nevertheless, great uncertainties remain, including the path of the global economic recovery; policy announcements that offer confusing signals to investors; industry costs; technology; and human resources.

Both parties agreed on the importance of sharing information and data covering all timeframes; historical, current, as well as possible future demand and supply scenarios. They also reiterated the benefits of continued participation in the Joint Organisations Data Initiative, especially as this moves into more transparent data for gas.

The second session focused on the conclusions of a recent joint study, as well as proposals for, and the status of, future joint activities.

OPEC underscored the final conclusions of a study on technological advances in the road transportation sector. The study covers conventional technologies, alternative technologies and fuels, possible bottlenecks, potential drivers (such as legislative requirements and consumer preferences) and expectations for alternatives penetrating both the light and heavy duty vehicle markets. The report also looked at how the impacts of these technology advances could translate into changes in oil demand, as well as the potential differences between the big economic blocks/regions.

A second presentation gave an update on preparations for a joint roundtable on offshore safety, which has been organised for the second half of 2012. Furthermore, an update on a proposed joint study to assess potential human resource bottlenecks in the oil industry was also put forward, with a presentation of the possible Terms of Reference for the study.

After thorough discussions and a review of the Dialogue’s overall progress, the two parties agreed with the following joint EU-OPEC activities proposed for the second half of this year and first half of 2013:

The organisation of an international roundtable on offshore safety in oil and gas exploration and production activities (November 2012); A study assessing potential human resource demand bottlenecks in the petroleum sector and a roundtable (1st half 2013); Conducting a study on energy efficiency and its potential impact on demand.