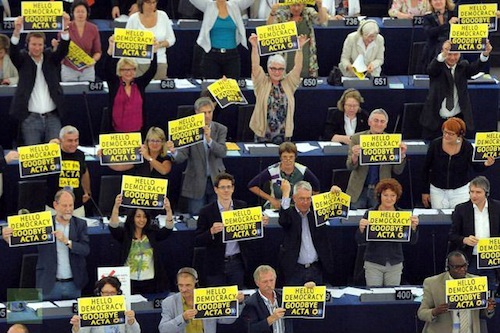 The Anti-Counterfeiting Trade Agreement (ACTA), was rejected by the European Parliament on Wednesday, and hence cannot become law in the EU. This was the first time that Parliament exercised its Lisbon Treaty power to reject an international trade agreement. 478 MEPs voted against ACTA, 39 in favour, and 165 abstained.

“I am very pleased that Parliament has followed my recommendation to reject ACTA” said rapporteur David Martin (S&D, UK), after the vote, reiterating his concerns that the treaty is too vague, open to misinterpretation and could therefore jeopardise citizens’ liberties. However, he also stressed the need to find alternative ways to protect intellectual property in the EU, as the “raw material of the EU economy”.

The EPP’s key ACTA advocate, Christofer Fjellner (EPP, SE), asked before the vote that Parliament should delay its final vote until the European Court of Justice has ruled on whether ACTA is compatible with the EU treaties. However, when a majority of MEPs rejected this request, a substantial minority responded by abstaining in the vote on Parliament’s consent.

While debating whether to give its consent to ACTA, Parliament experienced unprecedented direct lobbying by thousands of EU citizens who called on it to reject ACTA, in street demonstrations, e-mails to MEPs and calls to their offices. Parliament also received a petition, signed by 2.8 million citizens worldwide, urging it to reject the agreement.

ACTA was negotiated by the EU and its member states, the US, Australia, Canada, Japan, Mexico, Morocco, New Zealand, Singapore, South Korea and Switzerland to improve the enforcement of anti-counterfeiting law internationally. Wednesday’s vote means that neither the EU nor its individual member states can join the agreement.