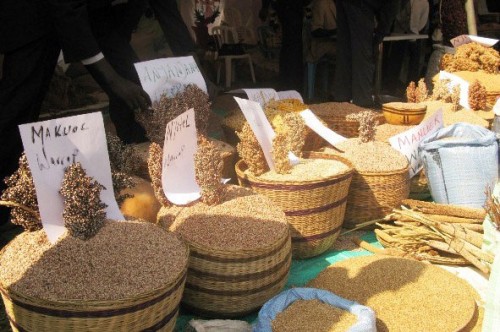 FAO’s Food Price Index – which measures monthly changes in international prices of a basket of meat, dairy, cereals, oils and fats, and sugar – rose two points to 215.5 in April, up one per cent from March.

The slight boost was driven mainly by a spike in dairy prices which indexed an averaged 259 points in April, up nearly 34 points or almost 15 per cent from March. The change is due mainly to a lull in milk production in New Zealand, the world’s largest producer.

The rising trend for cereals is forecasted to last throughout the year, barring unusual weather conditions. Coarse grain production is expected to set a new record at 1.266 million tonnes, up 9.3 per cent from the 2011 high of 1.167 million, according to the May issue of FAO’s ‘Cereals Supply and Demand Brief.’

The Rome-based agency predicts that global wheat production will reach 695 million tonnes, up 5.4 per cent from last year’s harvest and just short of the 672 million record level in 2011.

Production of maize in the United States and recovery from drought in the Commonwealth of Independent States (CIS) is expected to drive this year’s harvest to about 960 million tonnes, about 10 per cent higher than in 2012. The US, the world’s largest maize producer, is expected to plant the largest area of maize since their highest level in 1936.

Still tentatively, FAO foresees rice production in the forthcoming 2013 season to rise to 497.7 million tonnes, 16 million tonnes more than in 2012, with particularly large increases expected in India and Indonesia.

In addition, prices for oils and fats fell 1.5 per cent, or 2 points, from March. Weakening energy prices and concerns about the global economy continued to weight on the vegetable oil complex, FAO said.

Meat prices averaged 179 points in April, keeping level since the latter part of 2012, but overall higher than the historical standards.

The FAO Sugar Price Index slipped 9 points or 3.6 per cent from March to 353 points in April.