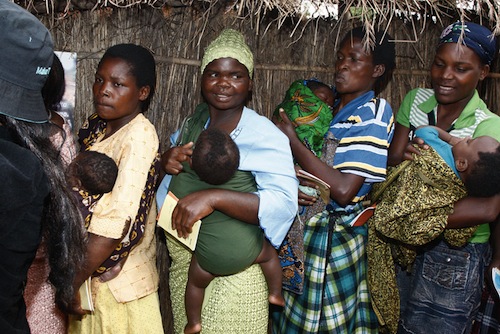 Eight African children who leave their families behind to undergo open-heart surgery are among the protagonists of this year’s United Nations documentary forum, which aims to create momentum for social change and for reaching internationally-agreed development goals on health.

“Numbers alone do not tell the full story. We need compelling stories that lead to action,” UN Under-Secretary-General for Communications and Public Information, Peter Launsky-Tieffenthal, today told an audience of filmmakers, multi-media artists and civil society representatives at the Envision 2013 event in New York.

The two-day event, organized by the UN Department of Public Information and the Independent Filmmaker Project, provides an opportunity for UN experts to meet with some of the most creative minds in filmmaking and new media to discuss ways of putting faces and stories to the statistics of anti-poverty efforts.

This year’s focus is on global health, directly linked to three of the eight anti-poverty goals known as the Millennium Development Goals (MDGs), which will reach their deadline in less than 1,000 days.

“We are focusing this year on reversing non-communicable diseases, maternal health and the society’s approach to aging,” said Joana Vicente, Executive Director of IFP.

Before yesterday’s screening of Kief Davidson’s “Open Heart,” in which African children seek surgery far from their homes, the programme kicked off the night begore with a screening of the Sundance award-winning documentary “Blood Brothers.” Directed by Steve Hoover, the film follows Rocky Braat, a former graphic designer who moved to India after meeting a group of HIV/AIDS orphans.

“Improving global health demands commitment from leaders, determination from partners and the engagement of global citizens. It also depends crucially on raising awareness. Those of you whose lives are dedicated to storytelling have enormous reach and impact,” Secretary-General Ban Ki-moon said last night in a message read by Launsky-Tieffenthal to more than 400 participants.

“Through the United Nations Creative Community Outreach Initiative, we are working closely with the entertainment industry to spread our messages and inspire action,” the Secretary-General said noting CCOI, which is part of the Department of Public Information.

The CCOI provides film, new media, television, and documentary producers around the world with access to information about the work of the UN and its priority issues, and also offers logistical advice and assistance.

Producers of the 2011 film “Contagion,” for example, consulted with both the CCOI and the UN World Health Organization (WHO), for accuracy in scripting the character and work of a WHO representative for the film.

The CCOI is also behind UN Headquarter cameos in films, such as the scene in The Transformers: Dark of the Moon where Optimus Prime addresses the UN General Assembly.

This year’s Envision programme – supported by the UN Foundation, the UN Development Programme (UNDP), the Bill and Melinda Gates Foundation, Pfizer and the 92nd Street Y – includes panel discussions about maternal health led by UN Population Fund (UNFPA) Chief of Sexual and Reproductive Health Laura Laski, and discussions of non-communicable diseases with Gaya Gamehewage, Communications Coordinator at WHO in Geneva.

In addition to the panels and film screenings, the event includes a 45-minute interactive immersive experience in which audiences are connected to a sensor data collection mechanism. As the participants make their way through the interactive theatrical production partly constructed by former foster care children, their emotional responses are measured.

The experience is meant to mimic some of the challenges and pressures of being a foster care child, said Atley Loughridge, who helped create the exhibit, “My Sky is Falling,” along with Lance Weiler.