Greece not to detain or deport Syrian refugees 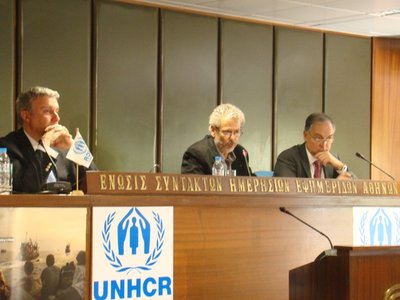 The UN Refugee Agency (UNHCR) organized on Wednesday a press conference in Athens on the escalating humanitarian crisis in Syria and the situation of Syrian refugees in Greece, making a series of proposals for their protection.

UNHCR’s Regional Refugee Coordinator for the Syria Situation Mr. Panos Moumtzis referred to the dramatic humanitarian crisis in the region, describing it as the “largest and most rapidly deteriorating in the world.”

People who were forced to flee Syria currently exceed 1.3 million, compared to 33,000 in April 2012. As the crisis in Syria shows no signs of abating, this number increases by nearly 8,000 people on a daily basis.

The percentage of women and children amounts to 71%.  “For all of us who work in the humanitarian field, this battle is around the clock” said Mr. Moumtzis.

“The security situation in Syria continues to deteriorate rapidly and this has an immediate devastating impact on the civilian population.”  UNHCR’s Head of Office in Greece, Mr. Giorgos Tsarbopoulos, presented the main protection considerations on Syrians in Greece.

He called upon the Greek authorities to ensure that Syrian refugees have access to Greek territory and safety; as well as unhindered access to the asylum procedure and international protection, in accordance with the provisions of the 1951 Geneva Convention or other forms of complementary protection.

He also underlined that Syrians should not be returned to Syria or to its neighbouring countries, until such time as the security and human rights situation in Syria has improved sufficiently.

Finally, he pointed out that Syrian refugees should not be detained and that their expulsion orders or return decisions should be suspended.

On behalf of the Ministry of Public Order and Citizen Protection, Major General Emmanuel Katriadakis underlined that, since 9 April 2013, an order is in effect, according to which “no Syrian will be detained in detention centers, but only for a few days, in order to identify their country of origin. There will be a six-month suspension of return decisions, which will be renewed every six months, until the situation in Syria is back to normal.”

According to figures provided by Mr Katriadakis, in 2012, the number of Syrians who were arrested on account of irregular entry to Greece was 7,927. This figure represents a 420% increase in comparison to 2011 (1,522 arrests). During the first quarter of 2013, 1,276 arrests were