Greek elections: Alexis Tsipras and his liberal self – analysis 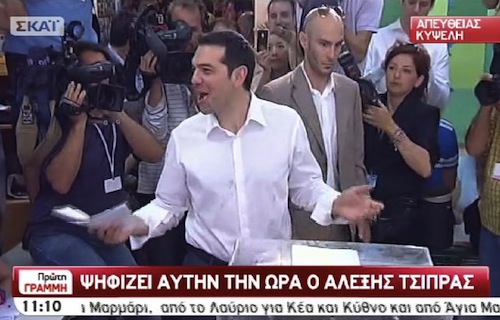 If SYRIZA finishes first in Sunday’s run-off poll, a series of things will happen:

1. It will be the first time in Greek modern history that a party of Left origin enters the Parliament with the winner’s walk.

2. The centre-right voters will be totally freaked out, due to the above, but also, because they cannot picture the future of the country under a Government of the Left, as Tsipras fancies to call a potential administration under his command.

3. Old leaders will have to realize that they should go; if they avoid doing so, they will be dragged out of office in an ugly way.

4. Eurozone people will hold their breath, waiting for the first words coming from Alexis Tsipras; this agony will last up until the programmatic speech of the new government.

5. The political system will start looking for the new Tsiprases. I would be pleased to observe an old personal wish come true; that is bypassing the next generation of politicians, just because they learned the job next to corrupted mentors.

6. After the initial shock, Europe will start arguing/theorizing about the neo-Leftism of Greeks that came out of anger and stubbornness but now is evolving into a new political trend.

7. Tsipras and friends will have an excellent opportunity to redefine politics, plant a few new seeds of 21st century ideology and focus on the humanistic economy, sustainable growth and compassionate capitalism, with a Leftish touch. This causes little concern since most Greeks (even the Left) can easily become true capitalists, providing they believe in ownership, self-employment and accumulation of personal wealth.

If SYRIZA finishes first in Sunday’s run-off poll, what will not happen (in a reverse order) is:

1. Tsipras will not prove so brave to mess with his factions and will save the true exploration of 21st century Greek well-being paradigm for the future; maybe somewhere around the middle of the election cycle. Big mistake. All previous Prime Ministers did the same thing and look what happened.

2. European debate and intellectual approaches will not begin in Greece; the country will remain politically polarised, under the realm of mediocre politicians and miserable academics who will continue looking for answers away from civic society.

3. New leaders will not appear in the case of ND and PASOK; at least for the next decade or so. The reason is simple: after the SYRIZA charge towards the political system, the dominance of ND and PASOK was moved higher up in the age pyramid and essentially away from the economically active population, turning pensioners as key target groups for these parties. Older people do not want Tsiprases.

4. To keep the peace amongst SYRIZA factions, Tsipras will be obliged to spin some straight anti-MoU moves with the Troika representatives, who will appear adamant as regards previous agreements; the latter know very well that if they give room to fresh debates, Greeks could get out of hand.

5. Old leaders will not step down easily, especially in the centre-right, since they know that political reality can easily change, especially as a result of a close race; polarization has already caused the re-emergence of the two-party system (ND-SYRIZA accumulative could surpass 60% of the vote). So, chances are any new coalition to assume responsibility of governance walking on thin ice.

Despite all, 6 and 7 points of the first bunch suggest that change is possible, [especially] even if radical SYRIZA finishes first. Then Tsipras would have to conclude the imitation process of Andreas Papandreou of the 1980s, who, as soon as he took over government, he scrapped radical factions and hushed disagreement offering the world to his political friends.

That is how SYRIZA could become a government. It also requires something else. Alexis to continue turning towards the right… Until he meets his liberal self…