Posted on: November 28th, 2014 by AlYunaniya Staff No Comments 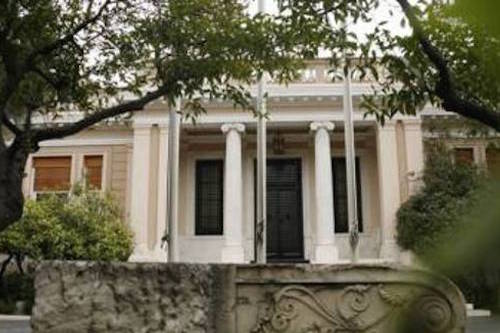 Prime Minister Antonis Samaras met with Government VP and PASOK leader Evangelos Venizelos yesterday at the Maximos mansion. The negotiations with the troika dominated the talks with the two men discussing the next step for Greece after the two sides failed to reach an agreement in Paris.

Exiting the Maximos Mansion Hardouvelis said he briefed the two political leaders on the negotiations in Paris. “It went well. We had progress. We did not close the issues. We continue,” he said, while regarding the possible extension of the current programme he said: “there could be one for a very short period of time for technical reasons.”

The government appears certain that there will be an agreement with the troika by the end of the year. A source close to the Prime Minister stated that “those who invest in catastrophe will be disappointed as there was no wreck or destruction in Paris.”

Negotiations with the troika will continue via teleconference calls in the coming days.

Most of the haggling has been over a projected fiscal gap in the 2015 budget, protothema.gr notes. Failure to strike a deal by the December 8 deadline means that the Greek government won’t be able to keep its pledge of quitting its bailout programme by the end of 2014.

The main issues of discontent are:

- A Finance ministry official pinpointed the “number one” issue being the fiscal gap for 2015. A Greek official said that “the timetable is very tight.” Meanwhile, a European source said that the troika would like to see the new law for debt settlement in 100 installments to be scrapped altogether.

- The troika is not satisfied with structural changes in social security thus far and is seeking to see pensions immediately reduced. They also want the pension age to be lifted but believe that this should be done gradually over a five-year period.

- Troika wants businesses to be excluded from the recent law that allows for debt settlement in up to 100 installments.

- Troika believes that there should be a common salary chart for the public sector or, at the very least, a reduction of “extra” bonuses and overtime.

- International creditors are seeking to have VAT rates increase and for VAT exemptions on some islands to no longer apply. They want the reduced 6.5% and 14% VAT rates for items that are considered basic needs to be lifted.

- The troika would like to see Greek labour law to include mass dismissals and changes to the way decisions for strike action are structured as well as changes to the law on unions.

Sources said that discussions with the troika had not resulted in a date being set for the return of troika’s representatives to Athens for a review prior to the Eurogroup meeting on December 8. Nonetheless, the extension of the bailout has yet to be discussed.

The markets have been negative concerning Greece’s early exit from the program with Greek government bonds having slumped and Greece’s 10-year bond close to 8%.