Samaras: Greece to go broke end of November if it gets no bailout 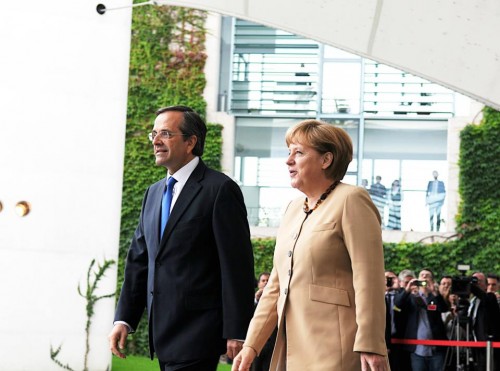 In an interview with Handelsblatt Prime Minister Antonis Samaras suggested that Chancellor Angela Merkel is “always welcome” to visit Athens. “We greatly appreciate that Germany and the Europeans are helping us at this difficult time,” he said.

This is the first time since the onset of the crisis that the German leader will visit Athens. Greek labor unions are planning a rally outside the parliament on Tuesday to demonstrate their opposition towards the visit.

Earlier on Friday Samaras warned that Greece was running out of funds and Greece will go broke at the end of November if it does not receive the next planned installment of its bailout loans.

Prime Minister Antonis Samaras said he is confident that the money will arrive on time, but in an interview with the German daily Handelsblatt but warned that it is “very difficult” to make further cuts to pensions and wages that the country’s debt inspectors are seeking.

“The troika is demanding above all further cuts to pensions and wages. That is very difficult, because we are already bleeding. The existing cuts already go to the bone. We are at the limit of what we can expect of our population.”

On Saturday the Greek government will meet with Troika inspectors for the last time before the October 8 EcoFin meeting, in an attempt to reach an agreement on the remaining 2 billion euros of austerity measures.

Greece has relied on bailouts from international creditors since May 2010. In return, it has imposed an austerity program, repeatedly slashing incomes, hiking taxes and raising retirement ages which has plunged the country in recession.

Officials from the European Commission, International Monetary Fund and European Central Bank are currently in Greece assessing the country’s progress in fulfilling the terms for receiving the aid. If their report doesn’t pave the way for the payment of the next 31 billion euros tranche of the country’s bailout, Greece could be forced to default on its debts.