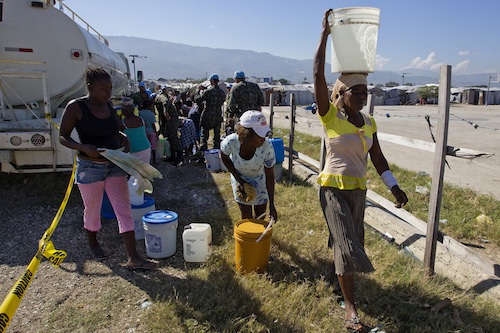 Breaking the political impasse that has plagued Haiti for some 16 months is crucial to achieve progress and consolidate democracy in the country, the head of the United Nations peacekeeping mission in the country told the Security Council.

Legislative and elections were due to take place in January 2012 at the latest, but in spite of an agreement signed in December between the executive and legislative branches to form an electoral commission, there have been no new developments.

“In the absence of these elections, over the past year we have seen the replacement of some 130 elected municipal governments with Presidential appointees,” said the Acting Special Representative of the Secretary-General and head of the UN Stabilization Mission in Haiti (MINUSTAH), Nigel Fisher.

At the legislative level, the mandate of one-third of Haiti’s senators expired in May 2012 and more terms will end in early 2014, impairing the Senate’s functions, Fisher warned.

“Holding credible elections in 2013 is fundamental to reinforce Haiti’s democratic institutions, strengthen the rule of law and respond to the urgent needs of Haiti’s citizens such as employment and social protection.”

The Caribbean nation has been re-building since the earthquake that struck in early January 2010, killing some 220,000 people and making 1.5 million others homeless, in addition to causing widespread destruction – particularly in the capital, Port-au-Prince – and a major humanitarian crisis.

Fisher added that, over the past year, Haiti has continued to face many challenges, including a slow economic growth rate that fell below forecasted levels, high unemployment rates, a recent spike in cholera cases, two tropical storms, and regional droughts that have exacerbated the high levels of food insecurity facing many households.

“Progress on elections has become the barometer for measuring progress towards a more inclusive political culture and for addressing institutional and development challenges, but Haiti faces many challenges beyond the electoral process alone,” Mr. Fisher said, adding that in spite of these obstacles, advances are still being made and the security situation remains stable overall.

Regarding the cholera epidemic, Fisher said the UN is committed to continue its support and to redouble efforts to mobilize the significant additional resources needed to fight this disease, improve water and sanitation, and strengthen the national health care network.

“I remain convinced that Haiti can and will make great progress in overcoming the political divisions, engaging in important and necessary reforms in the institutional and State law and responding to the urgent needs of its citizens,” he added.