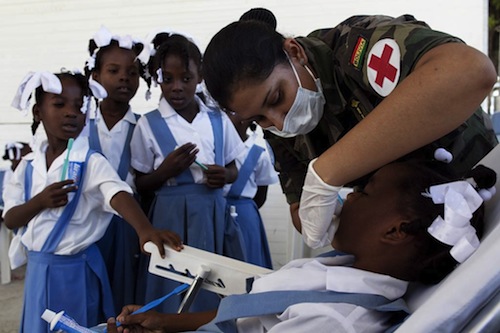 According to the initial results of the Haiti Demographic and Health Survey (DHS), which covered 13,350 households, 77 per cent of children aged 6-11 years attended primary school in 2012, compared to just below 50 per cent in 2005-2006 when the last survey was conducted.

“Results of the survey show that the efforts of partners in Haiti in these three years contributed to progress in many sectors and mitigated the impact on children of the 2010 earthquake, the outbreak of cholera and other disasters.” said the representative of the UN Children’s Fund (UNICEF) in Haiti, Edouard Beigbeder.

“These findings call for a continued commitment to support the country in sustaining this success while addressing existing challenges and where progress has lagged,” he continued.

The Caribbean nation has been re-building since the earthquake struck in early January 2010, killing some 220,000 people and making 1.5 million others homeless, in addition to causing widespread destruction – particularly in the capital, Port-au-Prince – and a major humanitarian crisis.

The DHS 2012 was conducted by the Institut Haitien de l’Enfance, under the overall direction of the country’s Ministry of Population and Public Health, and was supported by UNICEF and the UN Population Fund (UNFPA), amongst others.

The 2012 Haiti DHS estimates socio-economic, demographic and health indicators for the entire Haitian population, including women of child-bearing age, children under five years of age, men aged between 15 and 59 years old. The last survey took place between October 2005 and June 2006.