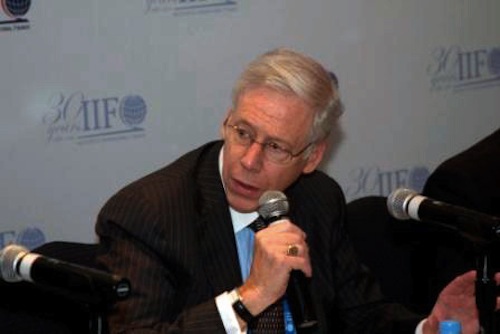 Referring to the situation in Greece, Institute of International Finance Managing Director Charles Dallara said: “The voluntary private-sector debt exchange led to an unprecedented level of debt reduction, which presents Greece with an excellent opportunity to move forward. Significant progress has also been made on necessary fiscal adjustment and structural reforms, with the strong support of the official community. However, it is clearly important following the June 17 elections that a new Greek government reaffirms its commitment to the central tenets of its reform program—liberalizing labor and product markets, advancing privatization, and strengthening the competitiveness of the economy with a greater focus on fiscal and structural reforms.”

Further, the IIF noted that given the severe contraction of Greece’s economy, the pace of short-term budgetary adjustment needs continuous examination for potential easing: it should be recognized this might require modest additional financing support. With this approach, the efforts being made to carry out Greece’s difficult adjustment program should begin to bear visible fruit.

“At the same time, official creditors should recognize that in an environment of severe economic contraction, the pace of short-term budgetary adjustment needs continuous examination for potential easing: The point about the short-term budgetary adjustment may be applicable well beyond Greece, with a suitable degree of differentiation depending on individual countries’ circumstances. Such a balanced approach may allow for stronger growth in the near term while permitting more determined reform effort in the medium term,” IIF said in a news release.