Posted on: May 5th, 2012 by AlYunaniya Staff No Comments 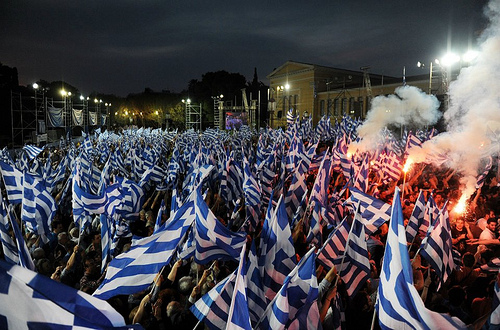 According to an Institute of International Finance confidential report, recent opinion polls in Greece suggest some recovery, after a long decline, in popular support for parties backing the EU-IMF programme, although parties opposing the programme could win 60% of the vote; this would make it difficult to claim the clear popular mandate needed to strengthen program implementation.

It is far from clear, given past tensions and differences, that ND and PASOK would be sustainable coalition partners in the years ahead. A renewed ND-PASOK coalition, moreover, will be seen by many to lack the clear popular mandate needed to successfully implement the further adjustment and intensified reforms required going forward. Depressed support for ND and PASOK need not translate into a hung parliament, however, in which no combination of parties could achieve a majority. Constitutional rules make it more likely than not that election results in line with the most recent polls would make possible an ND-PASOK government with a majority of 8-15 seats.

An analysis of opinion polls taken between April 12 and April 20, the last day polls could legally be published before the May 6 elections, indicates that parties failing to meet the 3 percent threshold would have received 7 percent of the total vote, had elections been held then. As a result, ND and PASOK together would have required no more than 37 percent of the popular vote to secure a one-seat majority. While support for the two parties has declined from almost 70 percent in January 2011 to just under 40 percent in the most recent polls, support has recovered a bit from a low in March. Were support levels in these polls replicated in the election, the two major political parties actively supporting the EU-IMF programme would be able to form a government with 156 seats, sufficient for a narrow 8-seat majority.

A somewhat stronger coailtion could be plausible if the 3 percent threshold is cleared by the Democratic Alliance (DA), a center-right party headed by former Athens mayor Dora Bakoyannis that also supports EU-IMF reforms. Though receiving just under 3 percent support when the poll publication deadline was reached, DA had increased its standing since the start of the year. Expelled from ND in May 2010 for supporting the first EU-IMF program, DA is the only nongovernment party in the current parliament, and one of the few running for the next parliament, that has given clear support to the second EU-IMF program.

Should DA enter the parliament and join ND and PASOK, it could increase the majority wielded by an ND-led coalition with PASOK to as many as 15 seats. This would require a reconciliation, however, between Dora Bakoyannis and ND leader Antonis Samaras, IIF writes.

Prospects for programme implementation could be imperiled, on the other hand, if DA fails to clear the 3 percent threshold or if ND and PASOK fall short of the 38 percent combined support registered in the most recent polls. A hung parliament, in these circumstances, would likely require the continuation of an interim technocratic government, followed by new elections after a decent interval, perhaps later this year.