Journalists continue to die in Somalia 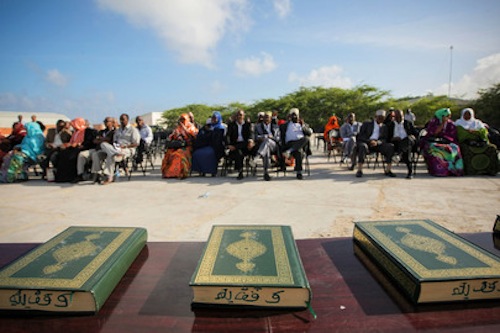 Somali authorities must do everything in their power to put an end to the continuing violence which has already claimed the lives of eight journalists in the African country this year, the head of the United Nations agency tasked with defending press freedom said today, as she condemned the latest killing of a Somali journalist.

“I am appalled by news of the violent death of Mohamud Ali Keyre,” the Executive Director of the Director-General of the UN Educational, Scientific and Cultural Organization (UNESCO), Irina Bokova, said in a news release.

“It is essential that the authorities do all in their power to stem the violence that is claiming so many civilian lives in Somalia, including a shocking number of media workers,” Bokova added.

Mohamud Ali Keyre was killed on 12 August in Mogadishu, the country’s capital, by a single bullet to the head. The 23-year-old reporter wrote for the website horyaalmedia.com and had previously worked for the Mogadishu-based radio broadcaster Voice of Democracy, before fleeing to Kenya because of threats against his life.

According to media reports, Ali Keyre decided to return to Mogadishu after deeming the security situation in the city to be improved.

After decades of warfare, Somalia has been undergoing a peace and national reconciliation process, with the country winding down its transitional federal governing arrangements. Until last year, most of the capital, Mogadishu, was, for several years, riven by a fluid frontline dividing the two sides – fighters belonging to the Al Shabaab militant group and troops belonging to the Somalia Government, with the latter supported by the UN-backed African Union Mission in Somalia (AMISOM).

In her statement, Bokova urged local authorities to implement measures improving the safety of media personnel across Somalia, while pointing out that press freedom was an intrinsic to Somalia’s growth into a full-fledged democracy.

“Journalists must be able to keep the public informed without fearing for their lives,” continued Ms. Bokova. “A free and independent press is an essential contribution to dialogue and national reconciliation in Somalia. It is also necessary to democracy and the rule of law.”

Since 2009, 18 journalists have been killed in Somalia. Their lives and work are commemorated on the website UNESCO Condemns the Killing of Journalists.