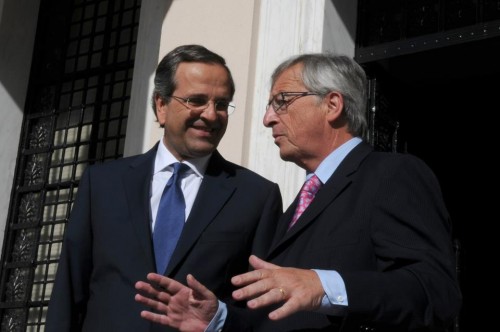 According to ANA, in joint statements made after their meeting at the Maximos Mansion, Samaras said that he briefed Juncker on privatisations, structural reforms and the EUR 11.7 billion cutback plan, as well as the government’s efforts to tackle tax evasion and illegal immigration. Samaras repeated the government’s determination to reach its targets. He added that “very soon all those who speculate in favour of a Greek exit from the Eurozone will be proven wrong”.

Eurogroup head stressed he’s “coming as a friend”, something which “has been proven on multiple occasions”. Juncker said Greek citizens have made huge efforts, something which other Eurozone members do not always realise.

A decision on whether to grant the government additional time to meet its targets will be based on the troika’s report, Juncker said. “I have to underline this will depend on the findings of the troika mission and we have to discuss the length of the period and other dimensions,” he said.

Warning it is the country’s “last chance” to avoid bankruptcy, Juncker urged the government to push through austerity cuts and said a credible strategy to close the fiscal gap is a pre-requisite for disbursing the next aid tranche. “The ball is in the Greek court – in fact this is the last chance and Greek citizens have to know this,” he said.

According to protothema.gr, the meeting was attended by Finance Minister Yannis Stournaras and deputy minister Christos Staikouras. They discussed all the developments in Greece and the Eurozone, the necessary steps to be taken to tackle the debt crisis, and the geostrategic conditions for stability, given the turbulent situation in Syria.