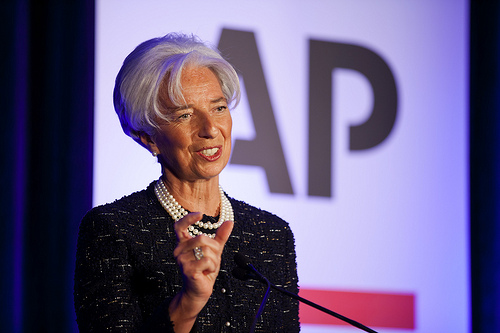 “There is still a lot of work to be done,” the IMF chief said of Greece, while praising interim Prime Minister Lucas Papademos for his work since November, media report.

According to an IMF transcript, Lagarde said: “We spent in the last six months an inordinate amount of time on Greek issues, on the Greek new programme, and in discussions with the Greek authorities. A lot has happened in Greece… Many things: change of government, change of approach by many of the partners on the ground, and clearly a new Prime Minister who is taking his task very seriously. A lot has happened in terms of implementation, because all the preconditions that we had identified, together with the other members of the troika, were implemented. Laws were passed.”

Lagarde stressed: “implement, implement, implement, paying tribute to the Greek people who share and bear the burden and make the sacrifices that we know of. I would call on those that are not sharing that burden that are not bearing it, to actually do so. If there is one area where more and better work needs to be done, it is in revenue collection, in the tax collection efforts, where more work needs to be done.”