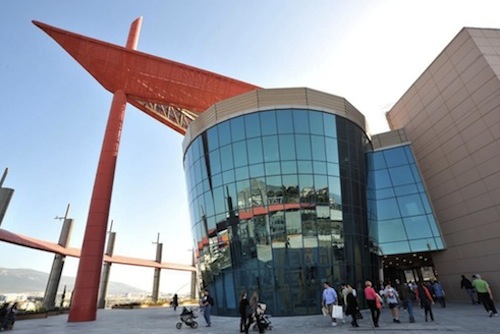 An explosive device behind a newspaper stand at The Mall Athens, at Maroussi slightly injured two security staff yesterday morning. Warnings for the bomb were made anonymously to Eleftherotypia newspaper at 9:55 a.m. and posted on the Zougla.gr site. This allowed for the timely evacuation of the mall.

The two security guards received minor injuries from the explosion, which occurred at 10:50 a.m., as the evacuation was still in process.

Although stores are closed on Sundays, cafeterias, restaurants and cinemas are open on a Sunday, with families flocking in the premises for lunch or a movie.

According to AMNA, the makeshift bomb consisted primarily of gelatin dynamite, possibly combined with ammonia nitrate/fuel oil (ANFO), that was placed inside a pressure cooker. Police found remnants of the pot and issued a call to the public for any information on the incident.

In its announcement, the police said that the construction of the bomb resembled those used by the Conspiracy of the Cells of Fire terrorist group; ANFO has also been used by this group as well as by the Revolutionary Struggle terrorist group. According to tovima.gr, cctv material has shown at least four armed men involved in setting up the bomb package near the escalators.

Speaking on Skai TV, Deputy Interior Minister Haralambos Athanasiou stated that “such actions aim at harming the democratic regime and are trying to destabilize it. Democracy is not afraid of terrorism and such actions will not bend anyone’s determination.”