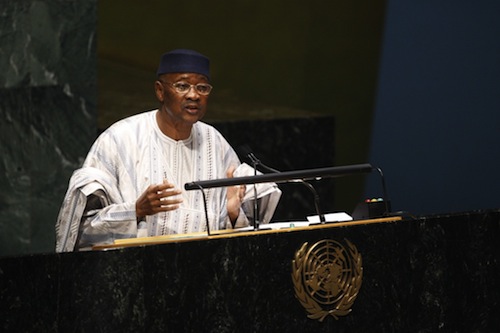 Rebel Malian soldiers have gone on state television to announce they had seized power in a coup after the government’s failure to help them fight against the nomadic Tuareg population in the northern part of the country.

In a statement read out on state television on Thursday, after heavy weapons fire rang out around the presidential palace in the capital Bamako all night, the rebels said the newly formed National Committee for the Restoration of Democracy and State (CNRDR) has decided to put an an end to the ineffectual regime of Amadou Toumani Toure,” Amadou Konare, a spokesperson for the soldiers, said.

We pledge to hand power back to a democratically elected president as soon as the country is reunified and its integrity is no longer threatened,” said Konare and  declared an immediate curfew until further notice.

A loyalist military source and two diplomats told  Reuters that they believed Toure had taken shelter in a military camp run by soldiers still loyal to him.

Renewed fighting between Government troops and the Tuareg has forced thousands of people to leave their homes, leaving them in dire need of shelter, food, and other basic needs according to UNHCR.

Secretary-General Ban Ki-moon today called for calm and a peaceful resolution of grievances in Mali after rebel soldiers reportedly announced they have seized control of the country.

Speaking with UN Radio today, the Special Representative for the Secretary-General for West Africa, Said Djinnit, said the news of the rebellion was met with condemnation  by the international community, and repeated the need for all actors in the African country to engage in dialogue to ensure stability.

Also,  France condemned the coup by  suspending its cooperation with its former colony while the Organisation of Islamic Co-operation expressed “extreme shock” at the coup in a country which had achieved democratic success in recent years.

In a statement released by the White House on Thursday, the US called for the “immediate restoration” of constitutional rule in Mali.