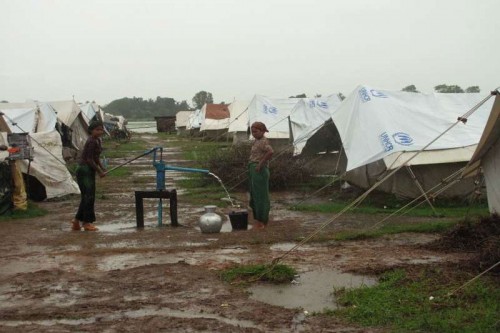 United Nations aid agencies are working with the Governments of Bangladesh and Myanmar to prepare for Tropical Cyclone Mahasen, which started crossing Bangladesh’s low-lying coast on Thursday., according to Al Jazeera,  threatening millions of people across the region.

“Mahasen could be life threatening for millions of people in Bangladesh, Myanmar and India,” warned Under-Secretary-General for Humanitarian Affairs and Emergency Relief Coordinator Valerie Amos. “Humanitarian organizations are working with Governments in Bangladesh and Myanmar to help people prepare for the cyclone.”

While the storm has weakened, it remains a category-1 cyclone, with wind gusts of 85 to 90 kilometres an hour. It is expected to hit just north of the Bangladeshi city of Chittagong, near the border with Myanmar, according to an update issued today by the UN Office for the Coordination of Humanitarian Affairs (OCHA), which is headed by Ms. Amos.

“This part of the world is regularly hit by major cyclones and so everyone is taking this threat extremely seriously and making sure the right measures are in place to mitigate the impact and place everyone on alert,” Oliver Lacey-Hall, the head of OCHA’s regional office for Asia and the Pacific said earlier.

In Bangladesh, the Government has raised the cyclone signal level to seven – on a scale of 10 – and humanitarian agencies in areas most likely to be affected have started preparedness activities, including pre-positioning emergency supplies. OCHA also reports that the Government has ordered the evacuation of some 1 million people from 15 coastal districts.

The low-lying, heavily populated and disaster-prone country has carried out a number of measures, including the training of community volunteers, the establishment of disaster-preparedness drills and the construction of cyclone shelters, which have helped to reduce the impact of cyclones.

The devastating 1971 Cyclone Bhola claimed an estimated 400,000 lives in Bangladesh. In 2009, when Cyclone Aila struck, volunteers helped evacuate thousands of people from the disaster area, saving countless lives. The death toll from that tragedy was less than 200.

While preparations were under way in Myanmar, one of several boats carrying people from a flood-prone and exposed camp in Rakhine state hit rocks and capsized on Monday. Fifty-eight people remain missing and are feared drowned, according to the Government.

Ms. Amos expressed her sorrow at the tragedy and stressed the need for the Government to ensure that people can reach safety before Mahasen hits.

In Rakhine, the UN and non-governmental organizations (NGOs) have started to implement a preparedness and contingency plan developed in March, which also supports the pre-evacuation plan the Government has developed in recent days.

In addition, authorities have started the process of evacuating tens of thousands of people who were displaced by inter-communal violence over the past 12 months, and moving them from camps to safe buildings or shelters.

“We are very concerned about the situation of displaced people in Rakhine state, particularly those in low-lying camps, and we are working urgently with the Government to find solutions that are viable,” said Mr. Lacey-Hall. “But we are running against time and lives are at risk.”

OCHA said that, according to the Rakhine authorities, some 36,000 displaced people have relocated as Cyclone Mahasen approaches. Humanitarian agencies report some reluctance by the uprooted to move due to a lack of understanding and fear that they will not be relocated back to the locations where they are currently living.

Aid organizations in Rakhine, including the UN High Commissioner for Refugees (UNHCR) and OCHA, are monitoring as many of the relocations as possible. They are providing the uprooted with information on the storm, on the need to move to safe places and on the Government’s preparedness plan.

The government in Sittwe, the capital of Rakhine, today asked community leaders of both the Rakhine and Rohingya communities to help with the relocations by explaining to the communities the need to move to safe areas. UN agencies and their partners have stressed with both communities and the Government the importance of ensuring safety and the protection of people at risk.

OCHA reports that the Myanmar Government says it has 33,000 gallons of gasoline on stand-by in the event generators are needed due to power outages. The Ministry of Health says that it has disaster kits for 30,000 people on stand-by.

For its part, the UN Children’s Fund (UNICEF) has sent additional staff to Sittwe in the past two days. It is also looking to increase its preparedness in other parts of the country, such as Chin State, Mandalay region and Kachin, where strong winds and heavy rainfall may further worsen the situation of vulnerable communities.