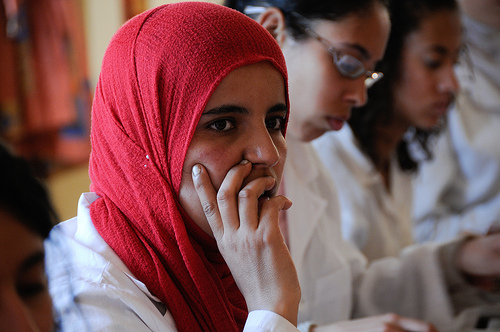 Tens of thousands of Moroccans have taken to the streets of Casablanca on Sunday in protests against the government’s failure to deal with unemployment and other social grievances, Al Arabiya reported.

The protest which were organised by trade unions accuses Prime Minister Abdelilah Benkirane of failing to deliver on the vows of social justice that brought him into power on November 2011.

Sunday’s rally, which is thought to be the largest opposition protest since a new government took office last November is esitmated between 15,000 and 20,000 people, according to Al Arabiya.

“The trade unions are united and the message to the Benkirane government is clear: he needs to change his strategy,” opposition Socialist MP Hassan Tariq told AFP as the crowd marched through the heart of Morocco’s largest city and its economic capital.

Union leaders have been appealing to the government for talks on improving salaries and social conditions in a country where  accoridng to a new report from the World Bank finds that almost half of all Moroccan youth between the ages of 15 and 29 are neither working, nor in school.

The ensuing November 2011 election saw the Justice and Development Party , a moderate Islamist party , win the most seats and head a coalition government.   It had vowed to deal with the protest movement’s grievances and fight for social justice in a country hit by high unemployment and illiteracy rates.

But less than six months after it was sworn in, Benkirane is facing renewed discontent from protesters who see no change.

It foresees a public deficit at 5.0 per cent of gross domestic product this year, down from over 6.0 per cent last year as the previous government splurged on subsidies, notably on food, to defuse the growing protest movement, according to AlArabiya.

Nizar Baraka, the finance minister, has said the country’s economy would likely grow by around 3.0 per cent this year, less than the 4.2 per cent forecast in the budget because of the drought and the debt crisis in the eurozone, which is Morocco’s biggest trade partner, AFP reported.