Migrants in Manolada fear for their lives after shooting incident- Amnesty 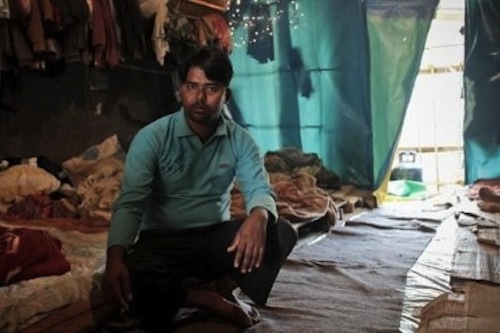 The victims of a recent shooting at a strawberry farm in southern Greece still fear for their livelihoods and safety, Amnesty International said after a visit to the farm.

A group of 33 Bangladeshi workers at the farm in Manolada were shot on 17 April by farm supervisors when they joined other workers protesting because they had not been paid for seven months. Eight of them were seriously injured.

“They hit us and said, ‘We will kill you.’ Three of them were shooting at us while the others beat us with sticks. The shooting went on for more than 20 minutes,” one of the workers told an Amnesty International delegation that visited the camp over the last few days.

While there, the organization observed horrendous conditions where workers – some in their early teens – live in crowded sheds without access to clean water and sanitation.

“The living conditions we’ve witnessed in Manolada are a shocking glimpse into an appalling underworld endured by thousands of migrant workers across the area,” said Kondylia Gogou, Greece researcher at Amnesty International.

“While the Greek authorities’ swift reaction to the shooting incident itself is commendable, more needs to be done to tackle the awful conditions and the labour exploitation that led the Bangladeshi migrant workers to protest in the first place. Such working and living conditions are unacceptable in 21st-century Europe.”

The Greek authorities promptly condemned last week’s shooting incident, which began when about 200 workers protested for not being paid for seven months, and are conducting criminal investigations. This resulted in four suspects being arrested – the farm’s owner and three supervisors.

However, the Greek authorities still need to urgently take measures to address to the long-term issue of labour exploitation illustrated by the incident”.

Last week’s shooting was the culmination of months of neglect and exploitation of thousands of migrant workers in the area around Manolada.

According to witnesses interviewed by Amnesty International, some 2,000 Bangladeshis work in the area, with a further 3,000 or more workers from other countries, including Bulgaria and Albania. Some have residence permits or asylum applications, but others are irregular migrants without insurance or access to health care.

The organization visited some of the sheds where the strawberry pickers live, near to the farm where last week’s incident happened. More than 20 people live in each of these structures, made of little more than plastic sheeting. They lack sanitation and a hose provides their only access to running water.

One of the workers’ representatives – who has lived in Greece for 15 years – told Amnesty International that the Bangladeshis were promised a meagre €3.15 per hour for a seven-hour workday. They had not been paid for seven months before last week’s protest. The workers also said they are forced to pay €20 a month – nearly a full day’s wage – to live in the sheds at the farm.

Seven of the Bangladeshis injured in last week’s shooting are still in hospital. There are ongoing concerns about the safety of the workers who remain on the farm.

“Our visit to Manolada confirmed the very real sense of fear and ongoing danger for the strawberry pickers, who are still reeling from last week’s violent attack and their despair over not being paid and the inability to support their families. The sad reality is that many of them feel trapped and that they have no other choice but to carry on working there,” said Gogou.