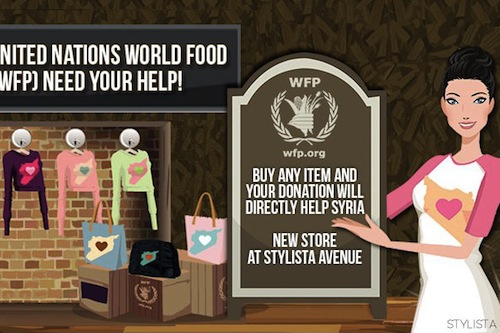 Hosted on the social networking site Facebook, the Stylista game lets players make virtual visits to famous fashion destinations around the world and shop for the latest fashion trends. The game will now offer limited edition t-shirts and bags that will contribute to the World Food Programme’s (WFP) assistance operations inside Syria.

“This is the first Facebook game to support WFP’s emergency response in Syria,” said the Director of WFP Global Private Partnerships, Jay Aldous. “We are grateful for the support of Sandbox Global and the network of Stylista players for their contribution to our life-saving work.”

Stylista, which was created by the Thailand-based digital gaming company Sandbox Global, is played by at least one million online gamers worldwide every month. Players who support WFP will receive special game play features in return for their contributions.

More than 60,000 people, mostly civilians, have been killed since the uprising against President Bashar al-Assad began in early 2011. Recent months have witnessed an escalation in the conflict, which has also left more than 4 million people in need of humanitarian assistance. WFP is currently scaling up its operations in Syria to be able to reach 2.5 million people in the coming months.

A second phase of the partnership with Stylista, which will next month, will support WFP’s Mother and Child Health and Nutrition and school meals programmes in Asia. In this phase, Sandbox is developing a Stylista avatar in the likeness of WFP Philippines National Ambassador Against Hunger, KC Concepcion, a fashion icon in her home country.

Stylista will include virtual goods for purchase and new options to enhance a player’s game success by engaging with the fight against hunger. Players will also be able to donate virtual currency, available for actual purchase.

In addition to the virtual goods, all players who make a contribution will receive an email of thanks from Sandbox and WFP.