Posted on: December 1st, 2012 by AlYunaniya Staff No Comments

Over 3.5 million people in drought-hit areas of Africa to receive food relief 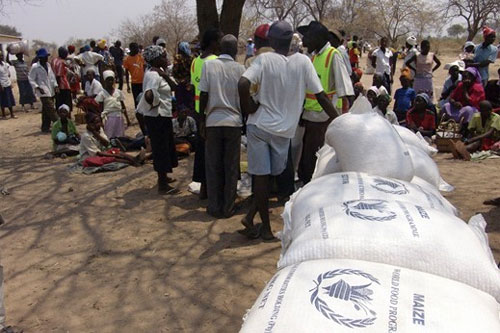 The United Nations food relief agency announced it is scaling up its efforts to assist more than 3.5 million people in drought-hit areas of southern Africa, particularly in Malawi, Zimbabwe and Lesotho, who are now facing the start of the hunger season.

“Large numbers of smallholder farmers and their families are in the grip of what is set to be one of the harshest hunger seasons of recent years,” said the World Food Programme’s (WFP) Deputy Regional Director for Southern Africa, Brenda Barton.

“With the help of governments, donors and regional organizations, we’re mobilizing resources to help the most vulnerable, not only with food distributions,” she added, “but also with innovative solutions like cash transfers via mobile phones so people can buy their own food.”

Erratic rainfall during the last planting season meant that harvests in many areas were not sufficient to sustain the nutritional needs of farming communities this year and, even where food is available in local markets, it is often too expensive for the poorest households, according to WFP. To add to this situation, communities already struggling to feed their families are now bracing for the onset of the so-called ‘hunger season’ which traditionally lasts from December until harvest time in March.

The UN agency notes that southern Malawi, southern Zimbabwe, and the southern highlands of Lesotho face particularly severe food shortages, while the prices of staple foods are increasing. Over the past year, the price of maize has increased 60 per cent in the markets of Lesotho and nearly 80 per cent in Malawi.

WFP is working with the Government of Malawi and partners to distribute food to more than 1.8 million people living in rural communities in the southern part of the country, and has also launched a programme to transfer cash via mobile phones to more than 100,000 people, allowing them to buy food on local markets.

In Zimbabwe, some 1.6 million vulnerable people face food shortages. While most of these are being assisted through food distributions, some 300,000 people are receiving cash to enable them buy their own cereals from local markets.

In Lesotho, WFP is working with the Government and other UN agencies to find longer-term solutions to the food crisis caused by two consecutive years of crop failures, while assisting more than 200,000 people in farming communities.

The current shortfall for WFP’s drought relief operation is $14 million for Malawi and $4 million for Lesotho.