Posted on: April 27th, 2013 by AlYunaniya Staff No Comments

Over 30,000 refugees and migrants have arrived in Yemen so far this year 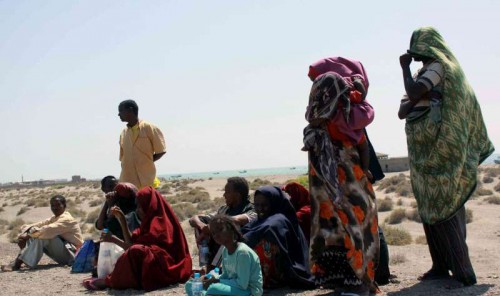 The United Nations refugee agency said today it has recorded the arrival of over 30,000 refugees and migrants to Yemen this year, the majority of them Ethiopians, with the rest coming from Somalia and a small number of other African countries.

Since 2006, when the UN High Commissioner for Refugees (UNHCR) began gathering data, close to half a million people have arrived in Yemen by taking the perilous boat journey from the Horn of Africa, the agency’s spokesperson, Adrian Edwards, told reporters in Geneva.

“Yemen is a historical transit hub for migrants and stands out in the region for its hospitality towards refugees,” said Mr. Edwards, adding that the country hosts more than 242,000 refugees. Over 231,000 of these are of Somali origin.

Mr. Edwards noted that recorded arrivals in Yemen of refugees, asylum-seekers and migrants have been rising in each of the past six years. Last year, 107,500 people made the journey. The arrival rate so far this year compares to 33,634 arrivals in the same period of 2012.

Somalis arriving in Yemen are automatically recognized as refugees by the authorities, while UNHCR conducts refugee status determination for other nationals.

According to the agency, Yemen is frequently used as a transit point by Ethiopians looking to travel to the Gulf States and beyond. Few Ethiopians decide to seek asylum. There are many reports of mistreatment, abuse, or torture among people who make the journey by smugglers boats.

“Conflict and instability in Yemen have limited the ability of the authorities to address trafficking, particularly along the Red Sea coast where Yemeni smugglers and traffickers are often waiting to receive new arrivals from the Horn of Africa,” said Mr. Edwards.

“However, recently the Government has been active in detecting smuggler hideouts and taking action,” he added.

Out of the total number of those arriving this year, some 7,518 arrived in January; 10,145 in February; and 1,806 in March. UNHCR is still recording arrivals for April.