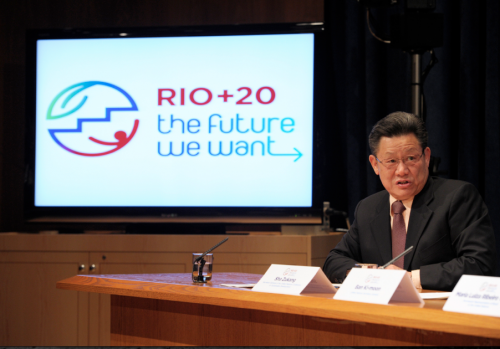 As part of its ongoing efforts to gain international recognition as a state, the Palestinian Authority is requesting full representation as a state in the United Nations Sustainable Development Conference (Rio+20) scheduled to take place in Brazil on June 20-22.

“We expect full-status participation because we already have it in UNESCO and we have ties with Brazil (the host country which recognizes the Palestinian state) and with more than 130 countries,” Palestinian Ambassador Ibrahim Alzeben told AFP.

The issue has sparked disagreement among UN delegations, as the final decision will be made at a procedural session when the official Rio+20 summit opens on Wednesday, Pragati Pascale, a UN spokesperson for the conference, said, according to AFP.

The Palestinian Liberation Organization has observer status at the United Nations and the Palestinians are pushing for full membership in the world body.

In October, The United Nations Educational, Scientific and Cultural Organization (UNESCO) became the first UN agency to grant the Palestinians membership. The move was denounced by Israel and prompted the United States to withhold funding from UNESCO.

According to Army Radio, Jerusalem is working to prevent Palestinian efforts to participate in the Rio+20 Conference as a full member state, and is also hoping to enlist Canada and the US in efforts to prevent the PA’s involvement in the environmental summit,  according to the Jerusalem Post.

“We are still hoping that the world will recognize our right,” said Alzeben, who announced that the Palestinian delegation will be led by Foreign Minister Riyad al-Malki, AFP reported.

The Rio+20 summit aims to reach common ground on sustainable development that would reconcile economic growth with poverty eradication and environmental protection.