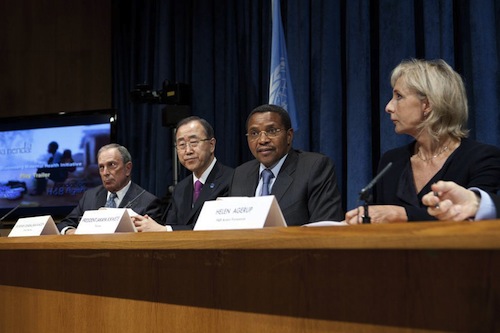 Tanzania has made significant advances in cutting maternal deaths thanks to a United Nations-sponsored programme that brings public and private sectors together to resolve one of the most stubborn but preventable woes afflicting the developing world, top officials said.

“To sustain and build upon these results, we need partnerships. We need mayors and presidents, grassroots activists and health care workers,” Ban said, noting that the partnership between the three leaders alone has helped cut maternal deaths by roughly one third in two years in the Kigoma, Morogoro and Pwani regions of Tanzania.

The Global Strategy – developed under Ban’s auspices with support from The Partnership for Maternal, Newborn & Child Health – was launched at the time of the UN Leaders’ Summit for the Millennium Development Goals (MDGs) in 2010, with some $40 billion pledged towards women’s and children’s health.

It seeks to attain the fourth and fifth of the eight poverty-fighting MDGs that focus on reducing child mortality and improving maternal health.

In his remarks, Ban noted that President Kikwete was one of the first world leaders to back the Global Strategy and is also one of its main drivers.

He also noted that Mayor Bloomberg, well-known for his commitment to improving the health of New Yorkers, is working for the health of women in Tanzania through Bloomberg Philanthropies, which funds efforts to help pregnant women and their babies in rural and isolated areas. Dr. Agerup, he added, is leading the H&B Agerup Foundation to invest in health of women and children over the next few years.