Posted on: January 14th, 2013 by AlYunaniya Staff No Comments 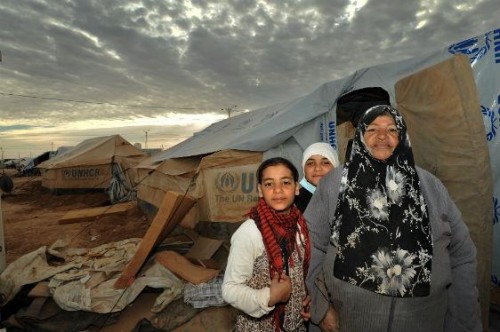 Rape has been a “significant” feature of the Syrian conflict and the “primary” reason its people have fled with their families to neighboring countries, according to a watchdog on Monday.

The report by IRC, “Syria: A Regional Crisis” details horrific levels of sexual violence, describing “rape as a significant and disturbing feature of the Syrian civil war.”

In the course of three IRC assessments in Lebanon and Jordan, Syrians identified rape as a primary reason their families fled the country. “Many women and girls relayed accounts of being attacked in public or in their homes, primarily by armed men. These rapes, sometimes by multiple perpetrators, often occur in front of family members,” the report states.

The IRC was also told of attacks in which women and girls were kidnapped, raped, tortured and killed.

Because of the stigma and social norms around the “dishonor” that rape brings to women and girls and their families, Syrian survivors rarely report rape. Many interviewed by the IRC also said survivors fear retribution by their assailants, being killed by “shamed” family members, or in the case of girls, being married off at an early age “to safeguard their honor.”

For survivors who manage to flee, there is a shortage of medical and counseling services to help them recover in the communities where they have settled and even there, challenges continue. Many women and girls face unsafe conditions in refugee camps as well as elevated levels of domestic violence.

According to IRC, more than 600,000 Syrians have fled to over-burdened neighboring countries and the UN anticipates that number could soon exceed 1million if the exodus continues at its current pace of about 3,000 refugees a day. Inside Syria, more than 2 million civilians are displaced and the UN estimates that 4 million are in dire need of assistance.

“The Middle East is once again facing a human displacement tragedy,” the commission states in its new report. “Current assistance levels are drastically insufficient to address existing needs, let alone the barest requirements to respond to a lengthy humanitarian emergency and post-conflict recovery.”