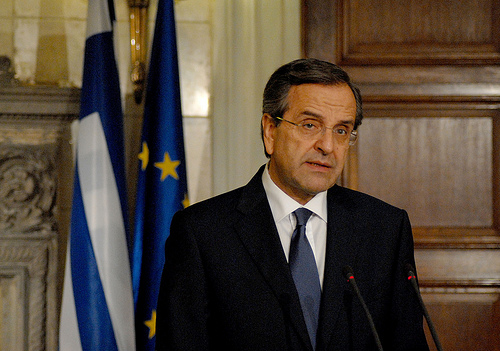 Greek PM Antonis Samaras, promised Jews on Sunday that he would introduce a new law to prevent Holocaust-denying parties from running in parliament, Haaretz reported.

Samaras spoke Sunday in a memorial ceremony at Thessaloniki’s Monastiriotes Synagogue marking the 70th anniversary of the first deportations of the city’s Jews to the German death-camps.

Last week the Greek government and the Jewish community of the country condemned the leader of the far-right Golden Dawn party following remarks questioning whether the Holocaust actually happened.

In a televised interview last Sunday, Nikos Michaloliakos, the head of the neo-Nazi Golden Dawn party, said there were no gas chambers or crematoria in Auschwitz and the number of six million Jews murdered in the Holocaust was “an overestimation which was made up.”

“With the announcement of the necessity for a new round of elections, the Greek people should be fully aware that a vote for Golden Dawn is a vote for Holocaust denial and anti-Semitism,” said Abraham H. Foxman, Anti-Defamation League National Director and a Holocaust survivor.

“The voters, who gave this extremist party 7 percent in the first round — perhaps in part as a protest vote — should examine their conscience and realize they voted for the party of ‘What Auschwitz?’”

Mr. Foxman added, “We welcome the Greek government’s immediate and unconditional condemnation of Michaloliakos’ statements, and encourage all political, civil society, and religious leaders to add their voices.”

The League had previously called on Greek President Karolos Papoulias not to appoint any Golden Dawn members to any government posts, regardless of any future coalition agreements.

The neo-Nazi party Golden Dawn won 21 seats in the 300-seat Parliament after receiving nearly 7 percent of the vote. Golden Dawn is known for its members’ use of violence and radical anti-immigrant policies.

Denying the Holocaust is not a punishable crime in Greece, as it is in other European countries.