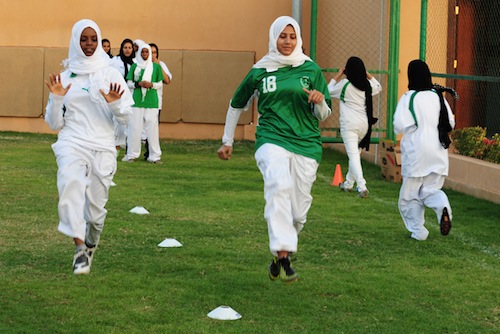 The United Nations envoy on sport for peace today welcomed the decision made by Saudi Arabia to send female athletes to London to compete in the upcoming 2012 Summer Olympic Games.

“This decision, following a similar one by Brunei Darussalam and Qatar, marks a significant progress in realizing the right of all to take part in physical and sporting activities, and hence achieving greater gender equality in sport,” the Secretary-General’s Special Adviser on Sport for Development and Peace, Wilfried Lemke, said in a news release.

“Decisions such as the one taken today by the Saudi Arabian authorities definitely set a positive example and bring us gradually closer to the realization of a more equitable future, on and off the field of play,” he added.

According to the International Olympic Committee, Saudi Arabia will send two female athletes – Wodjan Ali Seraj Abdulrahim Shahrkhani, who will compete in judo, and Sarah Attar, who will compete in athletics – to the 2012 Games, which start on 27 July in the UK capital.

Lemke noted that the UN family, the Olympic Movement and their partners, have long worked together to promote the participation of women in sports activities and competitions, as well as in management and leadership roles.

“This is for instance reflected in the fact that today, at the Olympics, participation of athletes is almost equally balanced between women and men,” he said, adding, however, that women and girls still face today a great deal of discrimination and marginalization in all sectors of society around the world.

“This saddening reality applies to the world of sport, despite the remarkable advances made in that area over the past decades,” the Special Adviser said. “The practice of sport and physical activity, at all levels, can have immense benefits for individuals, communities and societies. No one should, on the basis of gender, race, ability, age, culture or religious considerations, be denied access to sport and miss on the positive effects its practice can bring.”

One of the eight Millennium Development Goals (MDGs) – anti-poverty and development targets agreed on by world leaders at a UN summit in 2000 – aims at “promoting gender equality and empowering women.” Mr. Lemke’s office has noted that sport has been recognised as a viable and practical tool to assist in the achievement of the MDGs.

In February, at the 5th World Conference on Women and Sport, organized by the IOC and attended by several UN officials, including Special Adviser Wilfried Lemke, participants adopted a declaration which said that “the promotion of women’s participation in sports activities, management and administration should, and must, serve the wider goal of supporting the international agenda of gender equality and the empowerment of women and girls.”