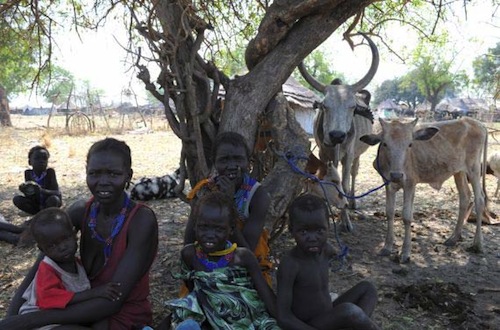 The United Nations voiced deep concern about the deteriorating situation in and around Pibor town in South Sudan’s Jonglei state, including recent violence, looting and displacement, and called on the Government to take immediate action against the perpetrators.

The UN Mission in South Sudan (UNMISS) is particularly alarmed by reports about the involvement in some of the incidents of “allegedly defected and ill-disciplined members of security forces,” as well as by statements issued by David Yau Yau’s led armed group demanding civilians to leave Pibor as well as the town of Kapoeta, in Eastern Equatoria state.

In addition to the “significant displacement of the civilian population out of Pibor,” the Mission said in a news release that it had also received reports of widespread looting of civilian dwellings and humanitarian organization premises.

The looting of food and other relief supplies is of great concern, especially given the upcoming rainy season in Jonglei, according to UNMISS spokesperson Ariane Quentier.

“This food that is pre-positioned is meant to be used in the coming months when roads will be impassable and when civilians will be in need of food to be able to survive,” she said in an interview with UN Radio.

“We want the Government to take action against the perpetrators of the violence that has been going on and make sure that those people are held to account… We have demanded that a number of measures be taken.”

The Mission noted that the Government of South Sudan has the primary responsibility to protect the population. “UNMISS calls on the civilian and military authorities, at the national, Jonglei state and Pibor County levels, to immediately take control of the situation, take action against any perpetrators and hold them to account.”

UNMISS, whose troops were already patrolling Pibor town before the looting started, has reinforced its presence there with additional troops and has deployed a military unit to protect pre-positioned food stocks. UNMISS peacekeepers also have clear instructions to assist in protecting the civilian population in Pibor.

In a similar statement yesterday, the Acting Humanitarian Coordinator for South Sudan, Yasmin Haque, said she was “alarmed” that once again, civilians from Pibor town have fled for their safety in large numbers. “I am also gravely concerned about the widespread looting of civilian property and humanitarian supplies witnessed by aid workers over recent days,” she added.

Dr. Haque said aid organizations had seen armed, uniformed personnel taking apart homes and breaking into small shops where those who fled the town had placed belongings for safekeeping.

“Food and household items, including nutritional supplements for malnourished children, were stolen from humanitarian common storage facilities, just a few hundred metres away from the town’s military barracks and county commissioner’s offices,” she said.

“We have been told by some of our NGO (non-governmental organization) colleagues that their compounds were completely looted, and that everything inside – even fixtures like solar panels – have been taken,” she added.

Condemning the incidents, Dr. Haque said such attacks against humanitarian facilities made it harder to provide live-saving assistance to people affected by hostilities. Humanitarian organizations had been forced to relocate their staff and “only a handful of aid workers” remained in Pibor.

“The humanitarian community stands ready to provide neutral and impartial assistance to all civilians in need,” she stated. “This can only happen if all parties respect and facilitate humanitarian activities, in line with their obligations under national and international law.”