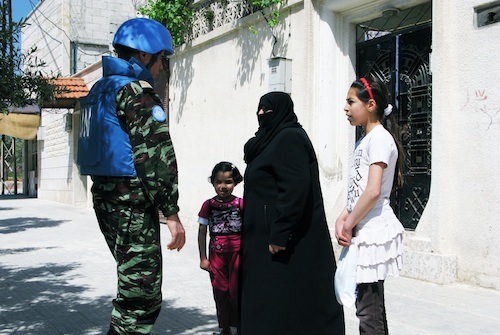 The European Commission has adopted a special measure for Syria, under the European Neighbourhood and Partnership Instrument (ENPI) to enable a rapid, simple response to the most pressing needs of the Syrian population and Syrian refugees. In addition to the humanitarian assistance already provided by the Commission, the special measure will help to respond to the crisis situation in Syria itself and in areas affected by the influx of refugees in neighbouring Lebanon and Jordan.

Actions carried out as part of the special measure will be wide in scope and may include the delivery of basic and specialised education and health services, support to livelihoods, capacity building (such as training of NGOs and activists), support to the media, cultural activities and civil society.

High Representative for Foreign Affairs and Security Policy / Vice President of the Commission, Catherine Ashton, said: “While the international community must continue to support Kofi Annan’s plan and use all its influence to stop the violence and begin a transition, the European Union remains strongly committed to supporting the Syrian people in this time of suffering. We need to deliver all the support we can.”

EU Commissioner for Enlargement and European Neighbourhood Policy, Štefan Füle, commented: “From the very first day of civil unrest in Syria, the EU has stood by the people of Syria. Today’s decision will significantly strengthen a solid financial basis and a flexible tool for quick and effective support to help the Syrians most in need.”

With Syria entering the second year of civil unrest, life for the population has become ever more difficult, with no obvious solution in sight. Basic commodities are expensive and access to fundamental services such as education and health is becoming increasingly challenging. Everyday life has become unpredictable and isolated, systemic acts of violence have spread almost over the entire Syrian territory. According to an estimate of the United Nations (UN), this situation has until now led to approximately 1 million displaced people including, over 40,000 refugees.

With regard to this deteriorating situation, the EU remains committed to continuing and increasing its support to the Syrian population in every way possible.

The special measure amounts to a total of EUR 23 million. Given the circumstances and the operational constraints on the ground, the focus will be put on projects implemented by partners with a solid track record in the country and in the region. This will complement the 10 million euros funding of humanitarian projects already undertaken by the European Commission in Syria and in the countries hosting Syrian refugees.

In Syria itself, EUR 12.6 million will be made immediately available to assist the Syrian people in coping with the unrest and its consequences and preparing for a transition. Selected projects of varying sizes will address the short and medium-term needs and will enhance the role of Syrian civil society in transition.

A flexible response tool will be set-up to allow quick, responsive and targeted support to projects implemented by local or international NGOs and organisations; in fields ranging from support to livelihood and the delivery of basis and specialised health services to capacity building and cultural activities.

In Lebanon, the overall objective of the special measure is to mitigate the impact of the influx of Syrian refugees. More precisely, a EUR 5 million action will seek to support the medium and longer term needs of both the local Lebanese population and of Syrian refugees in the main host communities in Lebanon. To this aim, the EU will continue its close co-operation with the United Nations High Commissioner for Refugees (UNHCR). Essential needs in the field of primary and secondary education for both Syrian refugees and the Lebanese host communities in the North and the Bekaa valley will be addressed and educational support provided to some 3,000 Syrian and 1,000 vulnerable Lebanese children.

In addition, Syrian refugees and host populations will be supported through community empowerment (such as awareness raising activities). Targeted support will aim to strengthen Lebanese authorities at central level (High Relief Commission), at local level (municipalities, and to the Ministry of Social Affairs through its Social Development Centres) and local NGOs.

In Jordan, the planned activities with the United Nations Children’s Fund (UNICEF), for a total of €5.4 million, will contribute to ensuring safe and appropriate services for Syrians living in Jordan, by providing up to 15,000 vulnerable Syrian children in host communities with access to free formal education for the current and next school years, and other relevant education and psychosocial support services. 2,000 children and adolescents excluded from the formal education system will have access to alternative learning activities at the community level.

All actions in this 2012 special measure will be implemented in complementarity and close coordination with EU humanitarian assistance, linking relief, rehabilitation and development, and avoiding any overlap with humanitarian assistance or with other donors’ contributions addressing other urgent priorities.