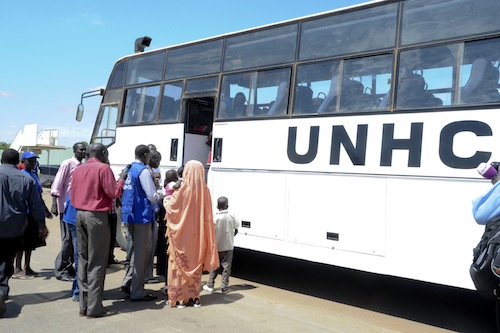 The Governments of Sudan and South Sudan announced they intend to resume talks in Addis Ababa, Ethiopia, next week, under the auspices of the African Union High Level Implementation Panel. UN Secretary-General Ban Ki-moon through a spokesperson encouraged the parties to reconvene “in an atmosphere of goodwill and calls on them to demonstrate the flexibility necessary to reach agreement on outstanding issues in accordance with the guidance and deadlines set by the African Union Peace and Security Council and the UN Security Council.”

South Sudan became independent from Sudan in July last year, six years after the signing of a peace agreement that ended decades of warfare between the north and south. However, the peace between the two countries has been threatened recently by clashes along their common border and outstanding post-independence issues that have yet to be resolved.

Ban’s spokesperson said that the Secretary-General reiterated the readiness of the United Nations to assist the parties implement their agreements and support the mechanisms established by them.

“He stresses the necessity of commencing the work of the Joint Border Verification and Monitoring Mechanism for peace and security along the border and confirms UNISFA’s readiness to immediately support its operations,” the spokesperson added.

The Security Council established the UN Interim Security Force for Abyei (UNIFSA) in June last year following an outbreak of violence after Sudanese troops took control of Abyei – a border area disputed between South Sudan and Sudan – which led to the displacement of tens of thousands of people in the weeks before South Sudan became an independent State.

Last week, the Council extended UNIFSA’s mandate for another six months, and demanded that the two countries finalize the establishment of an administration for the area in line with an agreement signed last year.

In a unanimously adopted resolution in early May, the 15-member Council determined that the prevailing situation along the border between Sudan and South Sudan constituted “a serious threat to international peace and security.” It called on the two countries to immediately end hostilities and resume negotiations, and voiced its intention to take “appropriate measures” if the parties did not comply.

Earlier this week, the UN Resident and Humanitarian Coordinator for Sudan, Ali Al-Za’tari, said that only 5,000 people have returned to Abyei while more than 100,000 people remain displaced. He noted that it was “high time” for humanitarian staff to have access to Abyei from Sudan – currently, international humanitarian staff are only able to get to Abyei if they travel via South Sudan.